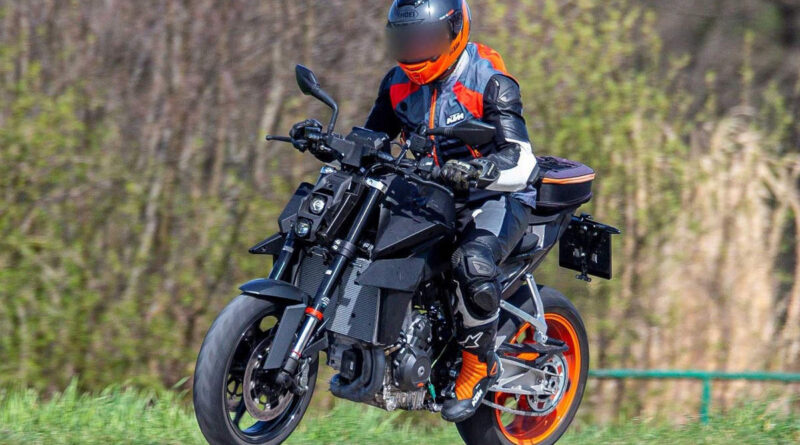 A new ‘naked’ KTM bike is in development and could hit the market next year. The 990 Duke was spotted in tests and may arrive with a new engine and much sharper design.

First, the design of the bike became much more defined angles, with straight lines and sharper corners. The front of the bike has also changed and features an optical set similar to the Suzuki GSX-S1000, with vertically stacked LED projectors. The lack of finishing is visible in the images, so the set may undergo changes.

Mechanically, the bike appears to have a new chassis and a new rear swingarm. In the model spotted, which appears to be entry-level, it has KTM brake calipers and WP Apex front suspension. These brakes are different from the ‘R’ spec model, which uses Brembo Stylema.

But the biggest news must be the new 990cc engine, which should be more powerful than the current 890cc ‘R’ version, which yields 119 HP. Considering the increased cubic capacity, the new KTM 990 Duke can reach up to 130 HP of maximum power in the top-of-the-line ‘R’ version.

Of course, all these numbers are estimates, there is still no official information on power and torque, let alone the launch date of the new model.

Anyway, we have to wait for more information but apparently 2023 starts with a new model for KTM.