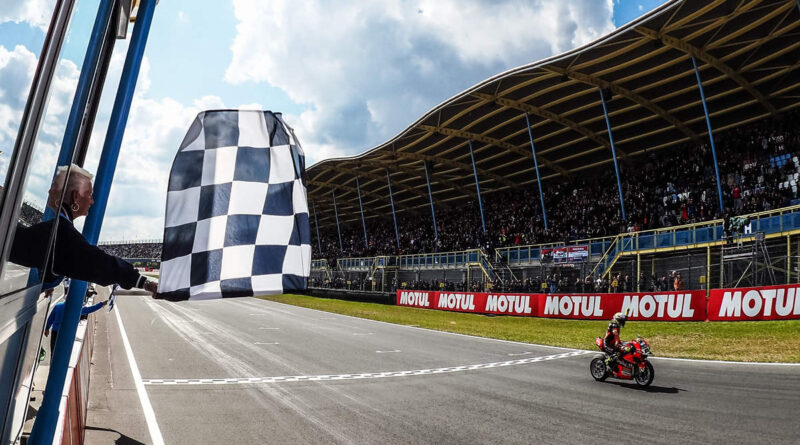 Ducati rider Alvaro Bautista won race 2 this Sunday at the TT Assen circuit in the Netherlands for the WorldSBK Championship. The Spaniard regained the championship lead and opened up a certain advantage to Jonathan Rea (Kawasaki) and Toprak Razgatlioglu (Yamaha), as both crashed and did not score.

In Race 1 (Saturday), Bautista took second place behind six-time World Champion Jonathan Rea (Kawasaki), and ahead of reigning Champion Toprak Razgatlioglu (Yamaha). In the Superpole race, he took third place, despite having crossed the line in second. He lost a position for having ‘touched’ the green area on the last lap.

But the most talked point of Race 2 was Rea’s collision with Toprak, at Turn 1, early in the race, which ended up knocking them both down. Both were fighting for the lead, with several exchanges of positions between the two. Bautista had joined the fight, but at that moment, he was just following them, waiting for the right moment to strike again.

On lap 6, Toprak was unable to brake efficiently at turn 1 and ended up going almost off the track. Rea didn’t slow down and tried to go his ‘normal’ way. Toprak tried to get back to the ideal line and the two collided. Bautista had to dodge to avoid crashing. Iker Lecuona (Honda) passed clean and took the lead. Andrea Locatelli (Yamaha) came along and hit Bautista’s right rib with the front tire, but he didn’t pass, taking third.

With that, Bautista managed to recover and went for Lecuona. The Honda rider couldn’t resist much as Ducati was yielding much more. The Spaniard then opened the gap with ease and crossed the finish line with more than 8 seconds of difference to the second.

Lecuona managed to stay in second for most of the race, but in the end he came under heavy pressure from Locatelli and was passed in a corner at the center of the circuit. He finished third and was very happy with the result. It was his first podium in the category and Honda’s first podium of the season.

Alex Lowes (Kawasaki) had to fight a lot with Scott Redding (BMW) and Axel Bassani (Ducati), but managed to finish fourth. Redding was fifth, after starting from 13th position, a great recovery race and adaptation to the new bike.

Local rider Michael Van Der Mark (BMW) also had a great race as he was not 100% physically. He started at 15th position and managed to finish eighth.

Therefore, with the result of the weekend in Assen, Bautista is the leader with 109 points, Rea the second with 91 and Toprak the third with 64 points.

Finally, WorldSBK returns from the 20th to the 22nd of May, with the Estoril round, in Portugal.