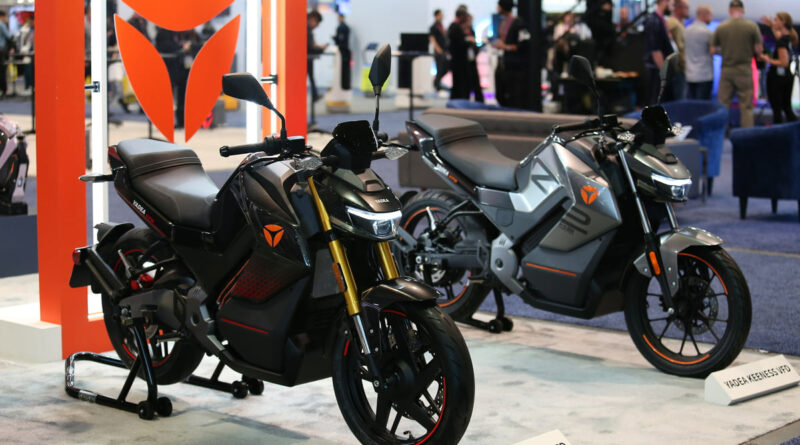 Yadea presented at CES 2023 (Consumer Electronics Show) in Las Vegas, USA, the Kneeness VFD, its first electric motorcycle, which arrives with modern design and cutting-edge technology, to be a great option for urban transport.

In addition to it, the company also presented the Yadea E150 electric scooter and the electric bicycles Yadea Innovator (first AI-powered folding electric bicycle), Yadea Trooper 01 and the Yadea Camper (scheduled to be launched in March).

The company’s highlight at the event was the electric motorcycle Kneeness VFD which, according to the company, is perfect for consumers new to the sector, as it features an exclusive design with the size of a ‘naked’ motorcycle and adequate performance for urban commuting.

It has a modern and aggressive design, with defined angles and basic inspiration for its aesthetics coming, according to them, from the silhouette of an aircraft.

In addition, it has a central engine with 5.5 kW of nominal power and 10 kW of peak power, which allows a maximum speed of up to 100 km/h and acceleration from 0 to 50 km/h in 4 seconds. The final transmission is done by chain, something unusual in the segment, which generally uses the belt.

The Yadea Kneeness VFD has two removable batteries, with 72V and 32Ah, that allow a range of up to 140 km on a single charge.

Anyway, the Yadea Kneeness VFD should hit stores in Europe and the US in the first half of 2023, but the price has not yet been disclosed.