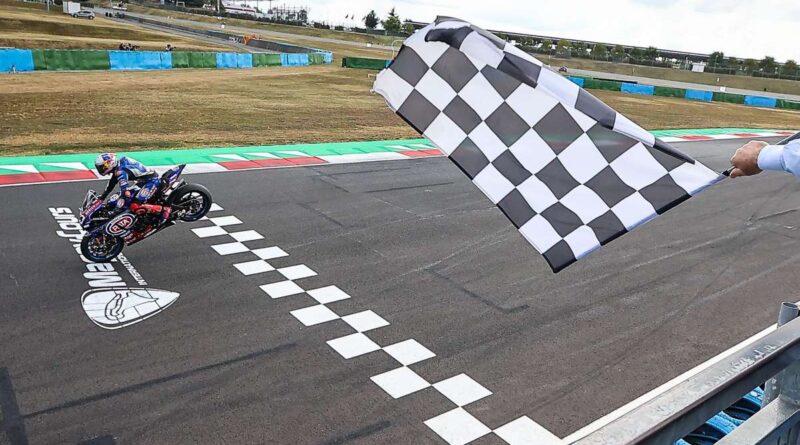 Starting from second position, Toprak started well and took the lead in the first corner but Rea quickly resumed and the Yamaha rider found himself in the fight for second position with Michael Ruben Rinaldi (Ducati) and Alex Lowes (Kawasaki). He managed to regain his position and get rid of these opponents, going after the six-time champion.

It didn’t take long and on lap 4, Toprak made the overtaking and, from there, began to open a gap to the Kawasaki rider. When crossing the finish line to victory, he had more than 4 seconds to Rea, something impressive on a track where the six-time champion has a very good performance.

After the race, Rea said that there was a very big drop in tire performance in the middle of the race and, therefore, he was unable to follow close to the Turk.

Alex Lowes had a great race and occupied third position when he made a small mistake, crashed and retired. With that, Locatelli, who was approaching, had no problem getting another podium in his rookie season.

Fourth place was occupied by Rinaldi, who practically had a solitary race, as well as Michael Van Der Mark (BMW) who came in fifth, despite having started from ninth position and had to fight fiercely in the opening laps.

Honda had another good result with Alvaro Bautista (Team HRC), who finished in sixth from 13th position. He was the rider who reached the highest speed on the circuit, with 300.8 km/h.

Therefore, with this Saturday’s results, Toprak managed to open up a 5 point lead over second-placed Rea.

Finally, race 2 and the superpole of the WorldSBK Championship, takes place this Sunday, September 5, in Magny-Cours, France, at the Circuit de Nevers Magny-Cours.