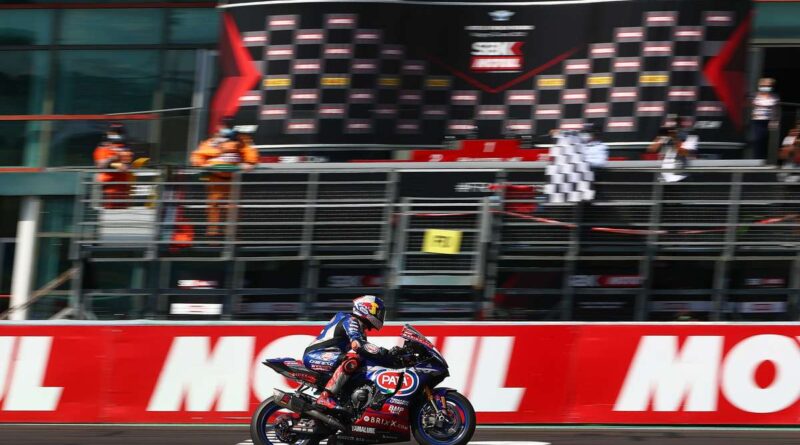 Yamaha rider Toprak Razgatlioglu won race 2 this Sunday at Magny-Cours, for the WorldSBK World Superbike Championship, and opened up a gap in the lead of the championship. The Turk dominated the weekend in France, winning race 1 on Saturday and race 2 this Sunday. He had also won the superpole race, but took a penalty and lost a position.

The dispute between him and Jonathan Rea (Kawasaki) was frantic, both in the superpole race and in race 2. The six-time champion had to fight a lot to try to get ahead, but when he could, he was quickly passed back.

In the superpole race, it was action from start to finish and Rea gave Toprak no rest much less gave up fighting for victory. They crossed the finish line ‘glued’ together. But as the Turk touched the green area on the last lap, he lost one position and took second place. The victory was for Rea.

In race 2, another show between the two. After vying for positions in the opening laps, Rea managed to take the lead and keep Toprak behind, but he was riding on the edge. He managed to resist until halfway through the race, when the Turk didn’t give a chance, divided a hard brake to take the lead.

Rea couldn’t accept defeat and kept fighting, very close to the Yamaha rider, but he couldn’t find a way to put his bike ahead. It was in this frenzy until almost the end of the race. With 4 laps to go, the six-time champion finally accepted second place, as the bike and tires showed signs that they were at the limit. Better to get 20 points than fall and come away with zero.

It was a weekend we hadn’t seen in the World Superbike for a long time, such an intense fight for victory for almost the entire length of the race. A real spectacle.

The results in other positions

Scott Redding (Ducati) managed to reach the podium in third in race 2 and leave France with a satisfactory result, as in race 1 he was only 12th and fifth in superpole.

Another solid fourth place for Andrea Locatelli (Yamaha) after managing to be third on Saturday and fourth on superpole. With that, the Italian took the fourth position in the championship standings, something impressive as this is his rookie season.

Chaz Davies (Go Eleven Ducati) was fifth and Alvaro Bautista (Team HRC) sixth. The Spaniard managed to finish the weekend with good results for Honda, as he also took sixth place in race 1 and was seventh on superpole.

So, with this weekend’s results, Toprak has opened up a small lead in the championship of just 7 points over Rea.

Finally, the WorldSBK takes place from September 17th to 19th, with the round of Catalunya, at the Circuit de Barcelona-Catalunya.