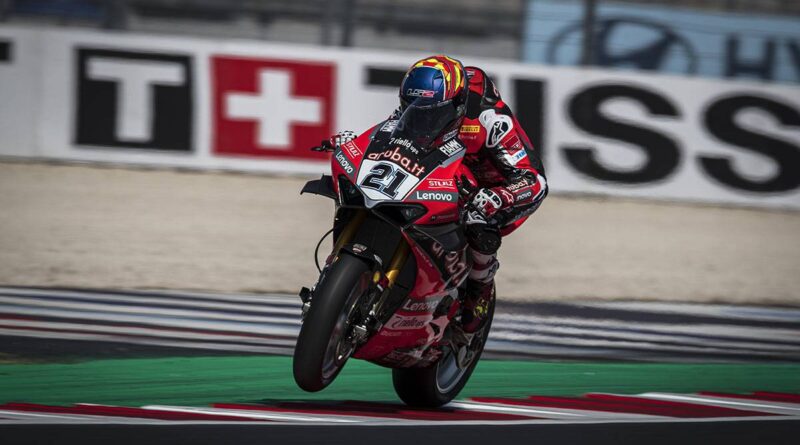 Racing at home, Rinaldi had a perfect race (and very aggressive at first), getting his first victory for the official Ducati team.

Coming from fourth position, the Italian managed, in the first corner, to place himself in second and, after a few more corners, took the lead, with aggressive overtaking, both over Toprak and Rea.

The Kawasaki rider started from pole position, but after a few corners he was hit hard by Rinaldi and Toprak. He was immediately able to retake second position, staying close to Rinaldi for several laps, but was unable to attempt a pass.

With 10 laps to go, Rea aggressively tried to get even closer to the Italian, but slipped and nearly fell. The six-time champion managed to save an almost certain fall, in the best ‘Marc Marquez style’. With the error, he lost 4 seconds, but only one position, and managed to finish on the podium.

Scott Redding (Ducati) didn’t get a good performance, he’s opted for tires a little harder than the others, hoping in the final laps to be able to fight for the podium, but it didn’t work, and finished only in fourth.

Alex Lowes (Kawasaki) had a very discreet race and was fifth. Alvaro Bautista (Honda) managed to improve his performance, gained some positions and managed to finish sixth.

Another who showed great performance (and celebrated a lot) was Axel Bassani (Motocorsa Racing Ducati), the youngest rider on the grid. He managed to finish seventh with a private team.

Tom Sykes (BMW Motorrad) had a solid race, managed to hold Bautista and Bassani until the penultimate lap, but made a small mistake and finished eighth (still good position for the German team).

Therefore, with the victory this Saturday, Rinaldi takes fifth place in the championship. Rea leads, but his lead to the second (Toprak) has narrowed a bit.

Finally, the Superpole race and race 2 of the WorldsBK Superbike World Championship, takes place this Sunday, June 13, at the Misano Circuit, in Italy.