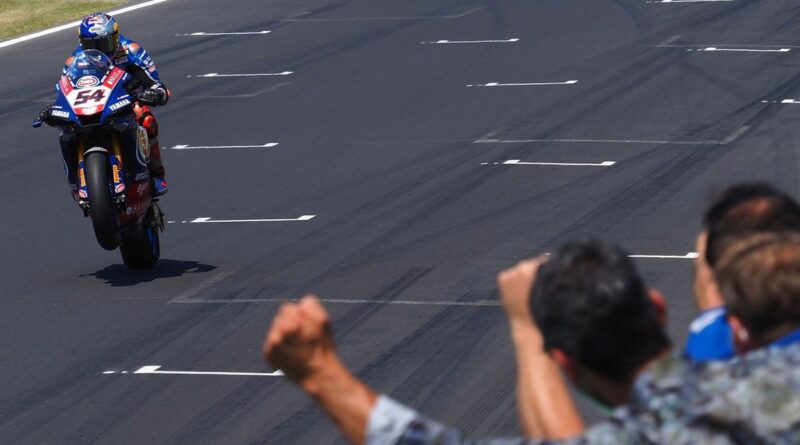 Another important fact with Razgatlioglu’s victory is that Yamaha breaks a streak of 15 wins for Kawasaki or Ducati since race 1 in 2014.

The victory was hard-earned: Rinaldi was heading for his third straight victory (because he won Race 1 on Saturday and the Superpole race on Sunday). But, on lap 8, the Turk took the Italian by surprise in a corner, made the overtaking and quickly opened up a certain advantage.

Rinaldi didn’t give up so easily. He applied pressure on the Turk throughout the race but was unable to reverse the position. Still, it was a great weekend for the Italian, who leaves Misano with two wins and a second place.

Jonathan Rea (Kawasaki) was the “disappointment” of the weekend: He finished all three races in third position, he couldn’t at any time show that he would fight for victory. I put ‘disappointment’ in quotes because a lot of people expected at least one win from the six-time champion. But, for him, the result was not so bad, as there were three podiums and important points in the championship, as he is still in the lead.

Another one that we can say disappointed was Scott Redding (Ducati) who, at in the three races, was not able to fight for the podium. He finished fourth all the way, and with it, he was even further apart from Rea in the fight for the championship (the only time in his WorldSBK career that the Brit has not managed to get a podium).

Another Italian who stood out this weekend was Axel Bassani (Motocorsa Racing Ducati), who finished Race 2 in seventh (his third top seven finish at Misano, and the best weekend of his young WorldSBK career so far).

So, with this weekend’s results, Rea remains at the top of the championship, but has had his lead cut to 20 points, between himself and second, Toprak.