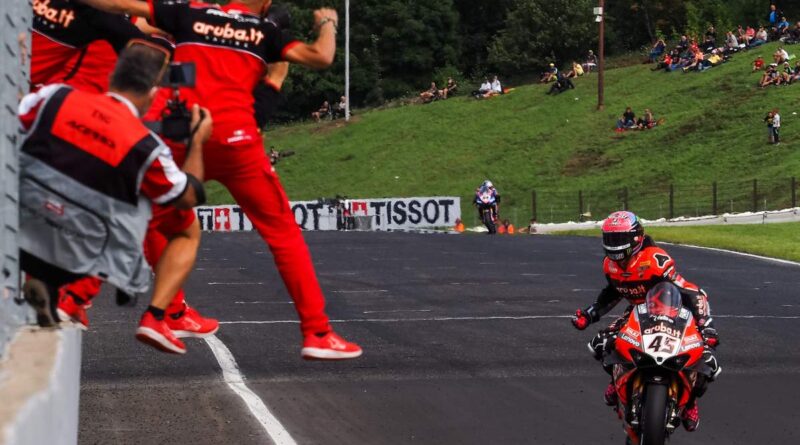 Ducati rider Scott Redding showed his strength at Most, Czech Republic, and won race 2 on Sunday for the WorldSBK superbike world championship. The British rider had a flawless and aggressive race, and ‘made up for’ the daring overtaking he took in the last corner in race 1.

Redding was about to win race 1 on Saturday when, at the last corner, he was passed by Toprak Razgatlioglu (Yamaha). He found the maneuver inappropriate and demonstrated his fury in the post-race interview.

This Sunday, with a ‘cooler’ head, he had a great Superpole race, the first of the day and finished second, but he couldn’t beat Toprak.

In race 2, there was no chance for the opponents. Although he didn’t start well and lost a position to Andrea Locatelli (Yamaha), falling to third, he went up and quickly regained second position, in a maneuver almost identical to the one he suffered on Saturday.

A few laps later, he was on Toprak’s tail and it didn’t take long to pass the Yamaha rider. He took the lead and made no mistakes. He held the Turk and, with the passage of time, began to open a certain advantage, to cross the finish line with ease.

Despite not having won race 2, Toprak was the name of the weekend, as he won race 1 and the Superpole, as well as having achieved second place in race 2. With that, and with a poor round by Jonathan Rea (Kawasaki), he managed to greatly reduce his championship deficit to just 3 points.

Rea, as mentioned, practically had a weekend to forget. He crashed (twice) in race 1 and retired, and finished both races on Sunday in third place. Despite two podiums, he lost many points to Toprak and could be in trouble for the remainder of the championship.

Locatelli was another rider who stood out over the weekend as he finished third in race 1 and fourth in both races on Sunday. Remembering that this is his debut season in the top category of the superbike world championship.

So, with this weekend’s results, Rea has seen his lead edge dwindle to just 3 points.

Finally, the WorldSBK Superbike WorldSBK, returns from August 20th to 22nd, with the Navarra Round, at the Circuito de Navarra, Spain.