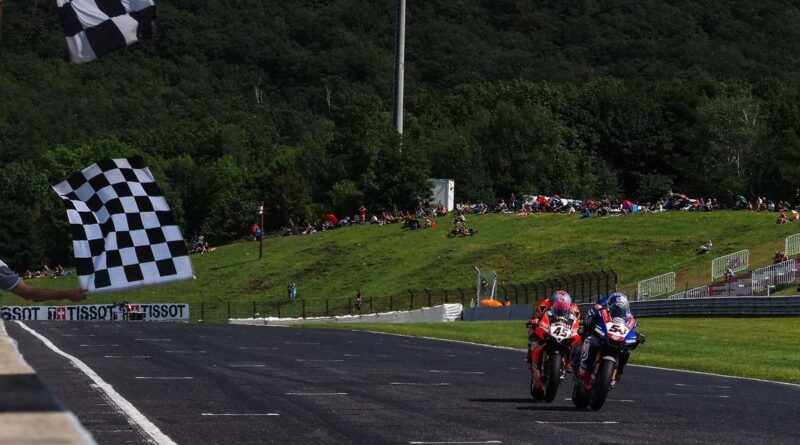 Toprak Razgatlioglu, a Yamaha rider, won race 1, this Saturday at Most, Czech Republic, for the WorldSBK world superbike championship.

He beat Scott Redding (Ducati) in the last corner of the last lap in an electrifying contest and reduced his championship deficit as leader Jonathan Rea (Kawasaki) crashed (twice!) and failed to score.

Toprak’s maneuver in the last corner generated a complaint from the Ducati British rider, who considered it as something ‘unsporting’ and even ‘lack of respect’. Redding was furious after crossing the line and answered the reporter who was interviewing him harshly.

In our view, Redding has the right to be p*&$ but, race is race, if you give it a chance, your opponent will try to beat you anyway. The Ducati driver didn’t do the basics in a race: when you’re under pressure and reach the last corner of the last lap, you have to take a more defensive line and defend with everything you’ve got. He just made the ideal trajectory, perhaps not even imagining that Toprak was going to attack him, and ended up leaving the inside of the curve (in the braking zone) free for the Turk to put inside and divide the braking.

In our opinion, a spectacular dispute and a great race by the two riders, something that we, as spectators, love.

Now let’s talk about championship leader Jonathan Rea. The Kawasaki rider started from pole position, lost the lead in the first corner to Toprak, but was in the Turkish’s tail. Redding managed to overtake Rea and subsequently passed the Yamaha rider. Rea, once again, showed good pace and was very close to the Turkish, but could not pass him.

Until, when he braked hard in the first corner, his motorcycle slipped and ended up in the gravel box. Miraculously, the bike was barely damaged and he was able to return to the race. He was scoring some points in 11th position when the front of his bike slipped and this time he couldn’t do anything as he destroyed it.

In fact, the race had several crashes and, in total, nine drivers did not complete, among them, the aforementioned Jonathan Rea, Michael Van Der Mark, Loris Cresson, Tito Rabat, Jonas Folger and Chaz Davies.

Therefore, with victory this Saturday, Toprak reduced his disadvantage to Rea. Now, only 12 points separates him from the six-time champion.

Finally, the Superpole race and race 2 of the WorldsBK Superbike World Championship, takes place this Sunday, August 8, at Most, Czech Republic.