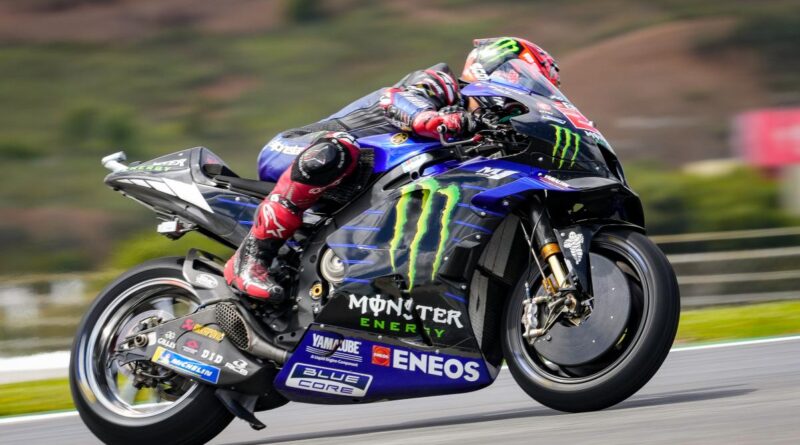 Fabio Quartararo, Monster Energy Yamaha rider in MotoGP, won the Portuguese GP, this Sunday, and took the lead in the championship. The Frenchman made an impeccable race crossing the finish line with more than 5 seconds of difference to the second place.

The podium was completed by his countryman, Johann Zarco (Pramac Racing), and by Aleix Espargaro (Aprilia Racing) who, at the end of the race, still tried to take second place, but ran out of tire to complete the overtake.

The race in Portugal was quite hectic, with the top five vying for every inch. Joan Mir (Team Suzuki Ecstar) took the lead at the beginning, after a great start from second position, with Fabio Quartararo moving into second after starting in fifth position.

It didn’t take long and the Frenchman managed to close the gap and seeing that he had more race pace, he managed to overtake with relative ease. From there, he was able to open advantage lap after lap to cross first, marking his first win of the season.

Mir was in second, but he didn’t have a good pace and was losing performance. It also didn’t take long for Zarco to arrive and overtake. With that, Jack Miller (Ducati Lenovo Team) stuck behind the Spaniard and, in a risky attempt to overtake him in turn 1, ended up falling and also taking the Suzuki rider to the ground. It was a disaster for Mir as, with second or third place in Portugal, he would emerge leader of the championship.

Who benefited from that crash was Aleix Espargaro, who had a solid run and finished third. It was his second podium of the season and, with that, he is just 3 points behind the leader.

Another rider who stood out in the race was Alex Rins (Team Suzuki Ecstar), as he started from 23rd position and managed to finish fourth, a truly impressive feat. With that, he tied for the championship lead (he is considered the 2nd, losing in the tiebreaker because he doesn’t have a win).

Francesco Bagnaia (Ducati Lenovo Team) was another highlight of the race as he started from last position and managed to finish eighth. He, who fell in qualifying, had to go to the medical center because he was feeling some pain in his shoulder, but he was released to run as no fracture was found.

Anyway, the race was very eventful from start to finish and Quartararo showed his cards. He is the championship leader with 69 points, and Alex Rins is second, also with 69 points. Next stop: Spanish GP in Jerez.

See the Championship standings after the race in Portugal:

MotoGP returns on May 1, with the GP of Spain, at the Circuito de Jerez – Angel Nieto.