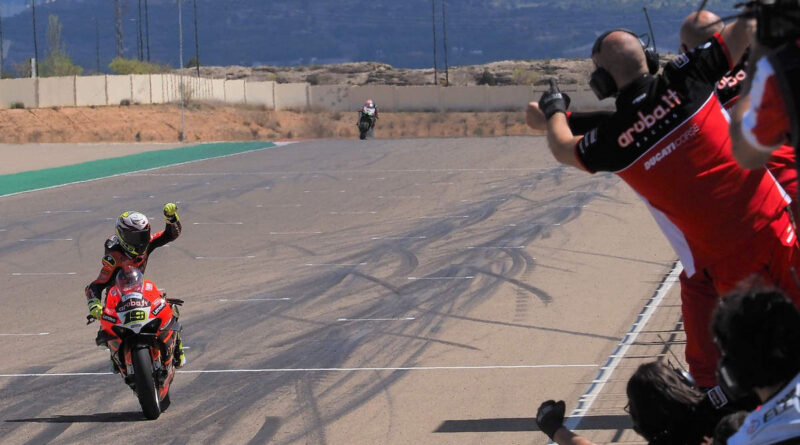 Ducati rider Alvaro Bautista started the 2022 season with two victories in Aragon for the WorldSBK Championship. The Spaniard, who returned to Ducati after two years with Honda, won the Superpole race and Race 2, both on Sunday.

In both Race 1 and the Superpole race, the battle for victory was intense from start to finish, with victorious overtaking happening in the final corner of the final lap. In the first, Bautista arrived at the last corner ahead of Rea, but the Kawasaki rider managed to get inside and cross the line first. In the Superpole race, which is much shorter, the Spaniard managed to close the path in the same place and emerged victorious.

In race 2, the dispute took place at the beginning, but when Bautista managed to take the lead, he managed to open a good advantage to his rivals. The dispute, in fact, was for the second position, with several exchanges between Michael Ruben Rinaldi (Ducati), Jonathan Rea and Toprak. Rinaldi gave the other two troubles but in the end, he had a small drop in performance and finished only in fourth (the same position in the other two races).

With the two wins and the second place, Bautista took the lead in the championship, but the advantage is small for the second place, in this case Jonathan Rea. The current champion, with third place in the three races, occupies the same position in the Championship.

Alex Lowes (Kawasaki) finished fifth in Race 2, recovering from his crash in Race 1, ahead of independent rider Axel Bassani (Motocorsa Racing), who finished sixth after the Italian made a good start.

The battle for seventh place featured four riders with Loris Baz (Bonovo Action BMW), Xavi Vierge (Team HRC), Garrett Gerloff (GRT Yamaha) and Iker Lecuona (Team HRC). Baz managed to get to the front halfway through the race and stayed there as the first BMW rider in Race 2. Spaniard Vierge finished as the Honda leader. Lecuona was ahead of Gerloff until the last lap, but was relegated to the tenth last lap.

Therefore, with the result of the weekend in Aragon, Bautista is the leader with 57 points, Rea the second with 54 and Toprak the third with 39 points. Now they head to a track that both Rea and Toprak can do better, the TT Assen circuit in the Netherlands.

Finally, WorldSBK returns from April 22nd to 24th, with the Dutch round, at the TT Assen Circuit.