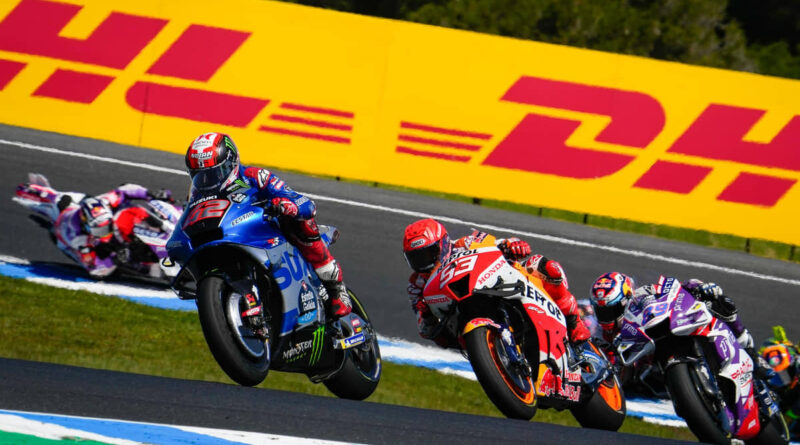 The race at the Philip Island circuit was the same as in Moto3, with a group of riders together from start to finish, in an intense dispute, not only for the lead, but also for the other positions.

In one of the disputes, Quartararo made a mistake and ended up going straight through one of the brakes, losing several positions, and staying out of the points zone. The Frenchman managed to come back at a good pace, started to make some passes but, as he was pushing too hard, he ended up crashing and had to retire.

The dispute for the lead became increasingly fierce, until Bagnaia managed to overtake Marquez and Martin, and went on to lead the race for several laps. Taking advantage of the opportunity, Rins also managed to overtake and was very close to the leader.

There were a few brief exchanges between them, but it pretty much stayed that way until the last lap, when Rins went up and took the lead, with Marquez coming along and putting himself in second. Bagnaia preferred not to risk it, as he knew Quartararo was out, and was content to finish in third position.

Marquez tried everything to come out with the victory, but it didn’t work, Rins defended very well in the last corners, went faster on the straight to the finish line, and gave Suzuki one last victory at the Australian circuit, as the Hamamatsu factory is leaving the competition.

With third place, Bagnaia took the lead in the championship with a 14 point advantage over the second place, with just 2 races to go.

Anyway, the race in Australia was intense from start to finish, not giving time to take a breath, and goes down in history as one of the best in the competition.

Now the MotoGP circus packs its bags and leaves for Asia. Next stop: Malaysian GP.

See the Championship standings after the race in Philip Island:

MotoGP returns on October 23 with the Malaysian GP at the Sepang circuit.