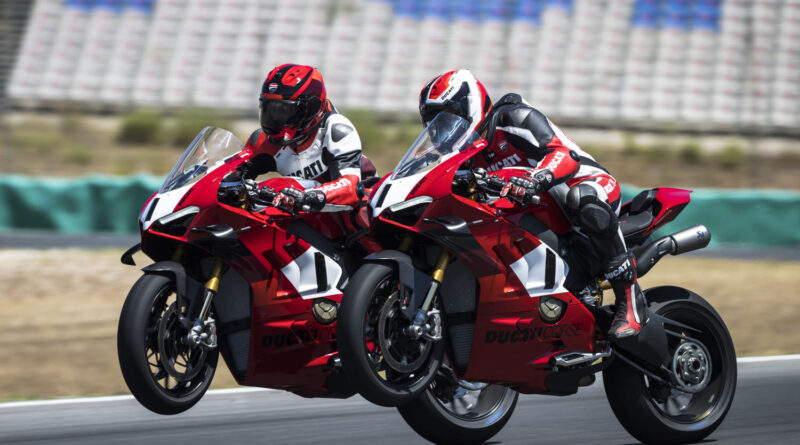 Ducati has launched in Europe the 2023 Panigale V4 R, its 998cc supersport bike, which arrives with a series of improvements, including a new engine with more than 240 hp of maximum power, to win on the most demanding tracks.

According to the brand, the new model offers the most sophisticated and refined technological solutions, which bring the road supersport bike even closer to the racing bikes used in the WorldSBK Championship.

In addition to its own improvements, the 2023 Panigale V4 R receives the same electronics package that was featured on the 2023 version of the Panigale V4 and Panigale V4 S, which further enhances the riding feel and performance on the track.

In short, it features the new Engine Brake Control (EBC) EVO 2 software, which features a different gear-to-gear calibration in each of the three selectable levels, a new strategy for the Ducati Quick Shift (DQS), a new strategy for the cooler, capable of offering better management of operating temperatures and greater thermal comfort for the rider, and a refinement strategies of the Ducati Traction Control (DTC) and Ride by Wire electronic throttle.

Finally, the new 2023 Panigale V4 R received a revision in the aerodynamic package, with new two-element carbon fiber wings (main + flap) that guarantee the same aerodynamic load, but are more compact and thinner, and paintwork inspired by the MotoGP, which integrates the white plates with the number “1” highlighted.

The engine of the 2023 Panigale V4 R is the 998 cm³ Desmosedici Stradale R derived from MotoGP, capable of generating up to 218 hp of maximum power at 15,500 rpm, in its standard configuration, respecting the emission limits of Euro5.

But with the appropriate racing exhaust, the new engine delivers up to 237 hp of maximum power and if it uses a new special oil, developed by Shell in collaboration with Ducati Corse, the maximum power reaches a monstrous 240.5 hp, something extraordinary.

The transmission is a 6-speed with dry clutch, in addition to the quick-shift system, and the gear ratio is the same used in the WorldSBK.

The bike’s bodywork has also been updated, with the adoption of a brushed aluminum tank with an increased capacity to 17 liters and a profile that offers better support for the rider’s arms and legs under braking and cornering.

The 2023 Panigale V4 R is equipped with a state-of-the-art electronics package based on the use of a 6-axis inertial platform that is also present in the other models of the Panigale family, in addition to an improved color TFT panel, and Full-LED lighting.

According to the company, the new model will be produced in a numbered series with the progressive number and model name engraved on the billet aluminum steering.