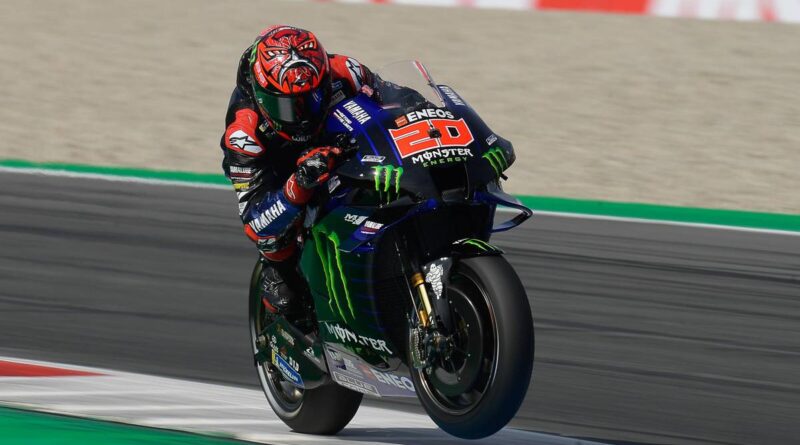 Fabio Quartararo, Monster Energy Yamaha rider in MotoGP, won the Dutch GP, this Sunday, and extended his lead in the championship. It was 1-2 for the official Yamaha as polesitter Maverick Viñales, crossed the line in second.

Quartararo started very well from second position and, already in the first corner, took the lead. But it wasn’t long before Francesco Bagnaia (Ducati Lenovo Team), a few corners later, took the lead.

The Frenchman had to fight hard, for several laps, until he managed to overtake the Italian. When he finally did, he started to open a comfortable lead, which made him reach the end in excellent conditions, for the victory.

Another who had to fight a lot was Maverick Viñales who, after a bad start, was left behind for the most part of the race by Quartararo, Bagnaia and Takaaki Nakagami (LCR Honda Idemitsu).

On lap 14, Viñales finally managed to overtake the Japanese and, after a long lap penalty for Bagnaia, took second place. He tried to get closer to his teammate, but it was too late to try for victory.

On lap 15, Nakagami lost his position to Joan Mir (Team Suzuki Ecstar) – the Suzuki rider managed to finish 3rd – and after a few more laps and some mistakes, he lost more positions and finished 9th.

Good dispute also took place in other positions. Marc Marquez (Repsol Honda Team), who made an excellent start from 20th to 10th after a few corners, fought a lot with Bagnaia and Aleix Espargaro (Aprilia Racing Team Gresini), and managed to finish in 7th.

Anyway, Quartararo leaves Netherlands in the lead of the championship, with 156 points, 34 points more than the runner-up, Johann Zarco, who has 122 points.

See the race result in Netherlands:

MotoGP will only returns on August 8th, with the Styrian GP, at the Red Bull Ring Circuit, in Spielberg.