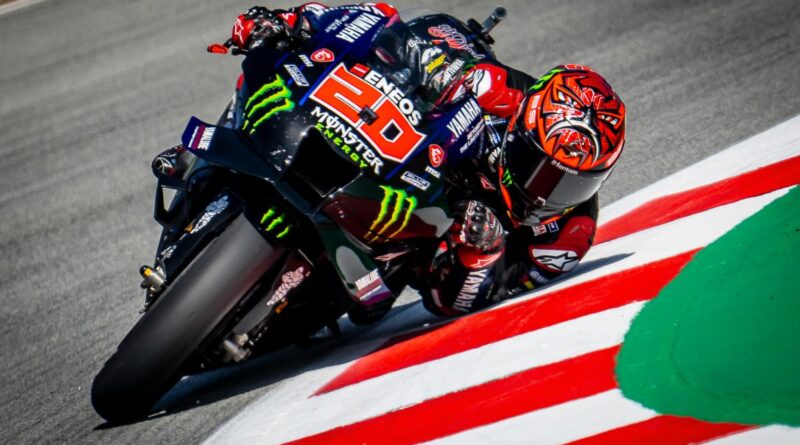 Fabio Quartararo, Monster Energy Yamaha rider in MotoGP, won the Catalan GP, this Sunday, with extreme ease, and crossed the finish line with more than 6 seconds of advantage.

But the most talked about (and sad!) point of the race was the celebration too soon by Aleix Espargaro (Aprilia Racing), which caused him to miss the podium. He was in second place when, opening the last lap, he got confused and started to celebrate, reducing his speed and waving to the crowd.

After a brief moment he noticed that the other riders were still racing and by the time he decided to return to the track it was too late. He ended up returning immediately behind Luca Marini (Mooney VR46 Racing Team), in sixth place, and had to risk everything to finish fifth.

When he finally crossed the finish line, he collapsed, began to cry profusely, not believing what had happened. On the way back to the pits, he was greeted with applause, but again the loud crying returned, demonstrating that he was totally devastated.

This outcome was very sad, as he was racing at home, had second place in the race, had a great 20 points in the standings and had high confidence. In addition, he ran with a custom helmet, named after the doctors who helped save his daughter’s life four years ago.

It was heartbreaking, there was no way not to be touched and in solidarity with the Spaniard who is fighting for the title in the category.

With that, Quartararo opened up a good lead in the championship. He started from third position, but already in turn 1, he took the lead and rode calmly, opening up a lead lap after lap. Nobody could come close, so the victory was pretty easy for the Frenchman who is starting to look for a second title.

The race was pretty uneventful, but at the beginning there was a very serious accident that took out Francesco Bagnaia (Ducati Lenovo Team), Alex Rins (Team Suzuki Ecstar) and Takaaki Nakagami (LCR Honda Idemitsu). The Japanese made a mistake on the brakes in the first corner and hit the Italian’s rear tire with his head and, as a consequence, also hit the Spaniard’s bike. It was a very ugly accident, as the crash was quite violent, with the helmet’s visor flying away. Despite the gravity seen in the images, apparently the riders are ok since there was no red flag and, until the closing of this edition, there was no information regarding the health of the involved.

Anyway, the race went exactly as Quartararo wanted, he managed to take the lead in the first corner and had no difficulties to win. Quartararo remains the championship leader with 147 points, and Aleix Espargaro is second with 125 points. Next stop: German GP.

See the Championship standings after the race in Barcelona:

MotoGP returns on June 19, with the German GP, at the Sachsenring circuit.