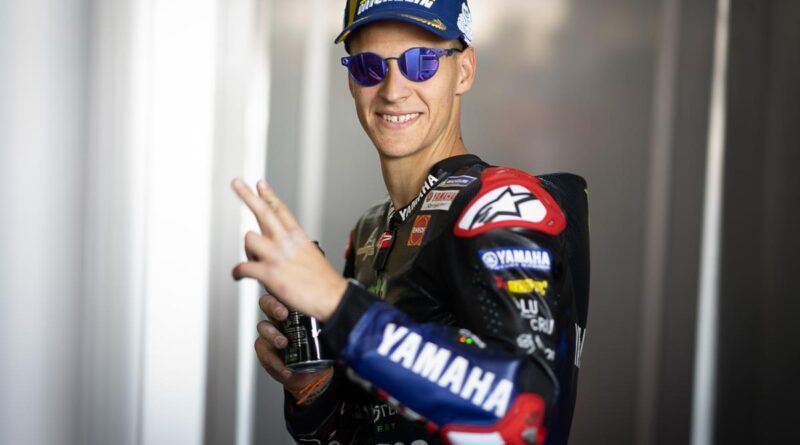 Yamaha has confirmed that it has reached an agreement with Fabio Quartararo for him to stay with the Monster Energy Yamaha MotoGP team for another two years, i.e. 2023 and 2024.

The 23-year-old Frenchman has signed a contract for two more years to try for another title with the team, as he was MotoGP World Champion in 2021, riding the YZF-M1 bike.

With that, a seat for Toprak Razgatlioglu in 2023 is ruled out, as the Iwata factory lost the satellite WithU RNF team (which will use Aprilia’s RS-GP bike), and for having a contract with Franco Morbidelli for next year.

Fabio Quartararo: “I am really happy to announce to all of you that I will stay with Yamaha for two more years. In the past, moving up to MotoGP with Yamaha and later to the Factory team were no-brainers. Yamaha believed in me from the very beginning, and that is something I do not take lightly. But that being said, this new agreement was a big decision. I’m at a great point in my career, so I took a bit more time taking this decision to be sure.

“I believe in the Yamaha MotoGP project, and I feel Yamaha are truly motivated. And now that we have officially confirmed our decision to continue on this path together, we can fully focus on the current season. I want to say ’Thanks!‘ to the people around me, who always help me and support me, as well as to the fans who are cheering me on. I really do appreciate all the support.”

Lin Jarvis, Yamaha Motor Racing Managing Director: “We are very happy to have reached an agreement with Fabio to continue with the Monster Energy Yamaha MotoGP team for 2023 and beyond. We brought Fabio into the Factory team last year knowing he is a special talent, but he even exceeded our expectations. One doesn‘t often come across a rider of his calibre. He was already showing his talent and speed in his two years with the SRT satellite team in 2019 and 2020, but when he made the step up to the Factory team, we could really see him growing stronger and maturing as a rider.

“In Fabio‘s first season and a half we‘ve booked many successes: 6 race wins, 14 podiums, 6 pole positions, and the 2021 MotoGP World Title. These results have come from a strong team effort from the rider, his crew, our engineers, and all team staff working together with a positive ‘can-do’ spirit. With Fabio we know he will always put in 100% of his best effort, and we have assured him that Yamaha will do the same and we will invest in future developments so that together we can challenge for the MotoGP World Championship Titles for years to come.”