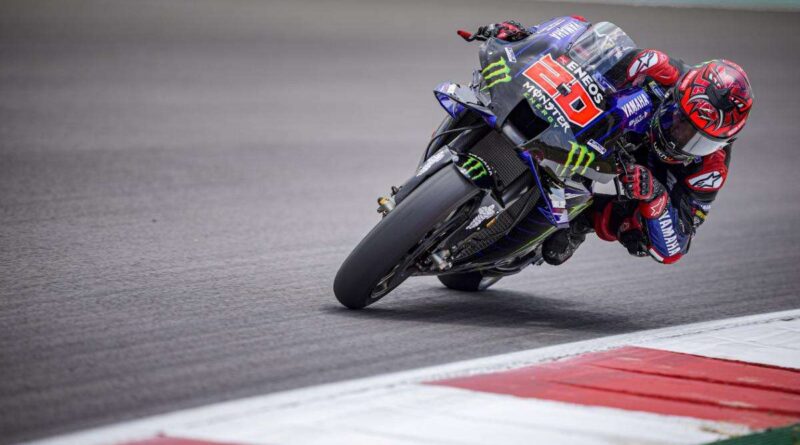 Fabio Quartararo, a Monster Energy Yamaha rider in MotoGP, will start at the front in the Portuguese GP. The Frenchman got the best time after the lap of Francesco Bagnaia (Ducati Lenovo Team) was canceled due to not having respected a yellow flag.

It was Quartararo’s 11th pole position, with the right to break the fastest lap record on the International Circuit of the Algarve. He scored 1’38.862, enough to beat Alex Rins (Team Suzuki Ecstar) and Johann Zarco (Pramac Racing).

Another highlight of the classification was the eight-time world champion, Marc Marquez (Repsol Honda Team) who, returning after 265 days recovering from surgery, made the sixth time, and starts from the second row.

With that, the Spaniard managed to be the best at Honda, as his teammate Pol Espargaro, not even for Q2 passed, and starts from 14th position. His brother Alex Marquez (LCR Honda Castrol) is 13th and Takaaki Nakagami (LCR Honda Idemitsu) did not even dispute the classification, due to being in pain from a bad fall, and starts from the last position.

Again, Aleix Espargaro (Aprilia Racing Team Gresini) starts from a good position, and is seventh. His teammate is starting to pick a good lap time, as he managed to make 1’40.444, close to experienced guys such as Danilo Petrucci and Iker Lecuona (Tech 3 KTM Factory Racing).

“The Doctor” Valentino Rossi (Petronas Yamaha SRT), unfortunately did not get a good ranking, and is only 17th. His teammate, Franco Morbidelli, starts in fifth.