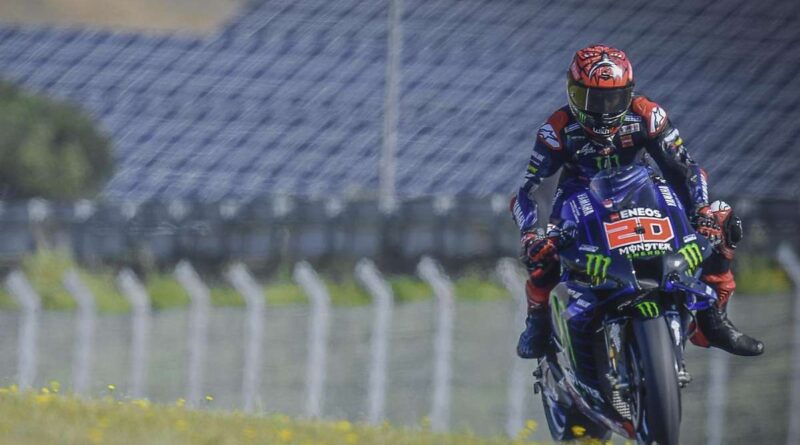 Fábio Quartararo, Monster Energy Yamaha rider in MotoGP, had an almost perfect race, on a perfect weekend, and he masterfully won the Portuguese GP this Sunday.

The Frenchman, who started from pole position, did not make a good start, dropping to sixth in the first corner. But it didn’t take long to be fighting with the racer leader, Johann Zarco (Pramac Racing Ducati). First, he had to go through Jack Miller (Lenovo Ducati Team) and Marc Marquez (Repsol Honda Team), who finished 7th but was fighting for third place at the start of the race, after a good start.

After overtaking Zarco, Quartararo led with authority and gave no chance of being overtaken, either by Zarco or Alex Rins (Team Suzuki Ecstar), the latter having spent most of the race putting a lot of pressure on the Yamaha rider.

Alex Rins, Jack Miller and Zarco unfortunately fell and abandoned, leaving their positions to be disputed.

Francesco Bagnaia (Ducati Lenovo Team) was the one who took advantage and climbed the table (having done an excellent race, by the way). He started from 11th and climbed the grid to finish second, being one of the highlights of the race.

Another highlight was Marc Marquez. The Spaniard, returning after 265 days out of action, started from 6th position, even fought for third at the start of the race, and finished in 7th, almost without strength at the end. Exceptional performance. By the way, it was the best Honda, as his teammate, Pol Espargaro, had problems on the bike and abandoned it.

See the race result in Portugal:

MotoGP returns on May 2, with the Spanish GP in Jerez.