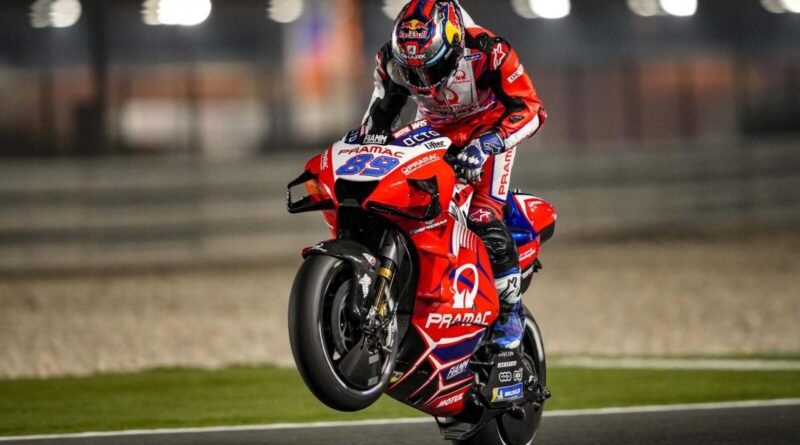 The rookie Jorge Martin, a Pramac Racing Ducati rider in MotoGP, will start at the front in the GP of Doha. He took his first pole in the top category of world motorcycling for this Sunday’s race.

Martin beat his teammate (and much more popular), Johann Zarco. His time was 1’53.106, almost 2 tenths of a second difference for the Frenchman.

The Pramac rookie has been impressing throughout the beginning of this season. In the previous GP, he started from 14th position, and in the first corner, he was in third, along with other Ducati bikes. Despite the great start, he lost performance and finished in 15th. The Spaniard said he “learned”, and that at the next GP, he hopes to manage the tires better.

The first official Ducati (Ducati Lenovo Team) only appears in 4th position, with Jack Miller, who has not yet found a good pace.

Following is another official Yamaha, this time, Fábio Quartararo, who starts from 5th position and, closing the second row, another official Ducati in 6th, with Francesco Bagnaia (who took the pole in the previous GP). There are four Ducati in the top six.

Again, Aleix Espargaro (Aprilia Racing Team Gresini) starts from a good position, and is seventh. He started from 8th place in the previous GP.

Sorry to repeat the same word but, again, Honda (which has the absence of Marc Marquez), failed to place any driver in the top ten. The “best” placed was the test driver, Stefan Bradl (who replaces Marquez), in 11th.

Valentino Rossi (Petronas Yamaha SRT), unfortunately did not get a good ranking, and is only 21st, ahead only of Lorenzo Savadori (Aprilia Racing Team Gresini).