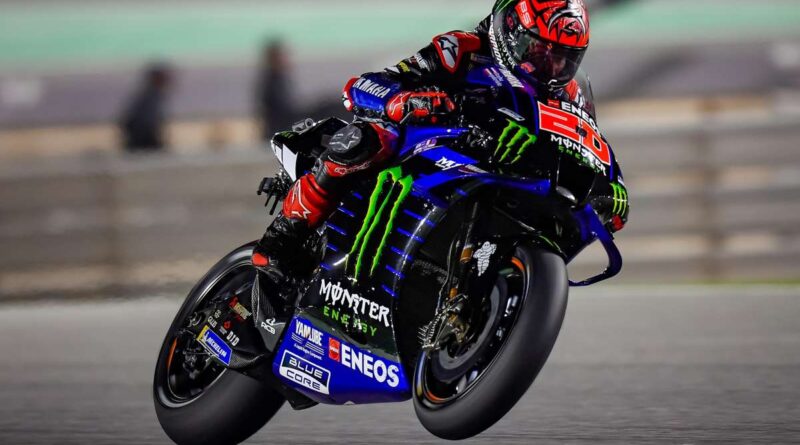 Fábio Quartararo, Monster Energy Yamaha rider in MotoGP, had a great race, risking everything, and won the GP of Doha this Sunday.

But make no mistake, the French did not have an easy life. He started from 5th position, had to fight a lot during the race, but near the end, risked overtaking the leader, Jorge Martin (Pramac Racing Ducati), held on to the final laps and gave Yamaha another victory in this season.

Quartararo was one of the highlights of the race. Another, undoubtedly, was the rookie Jorge Martin, who started from pole position. The Spaniard’s start was very good, and he stayed ahead, almost the entire race. It was only a few laps to go that Quartararo overtook him. On the last lap, he still lost the second position to his teammate, Johann Zarco. He could have returned it, but he didn’t. In an interview after the race, he said that if he had been another rider, he would have returned the overtaking. What a talented rider is emerging!.

Zarco then secured second place on the podium and thus took the lead in the championship. The Frenchman made a strategy of not pushing too hard, and decided to stay behind his teammate for most of the race. In the end, he got the position that would give him the lead, and left very happy with it.

Who showed a voracious appetite for some position on the podium was Alex Rins (Team Suzuki Ecstar), who tried everything, but finished only in fourth, after an intense battle with Maverick Viñales.

The Yamaha rider was unable to make a good start, leaving from 3rd position. In the first lap, he was in tenth, which totally hampered his race. Viñales managed to recover part of it, but lost a lot of time in traffic and had to fight for the fourth position. In the end, after a lot of fighting, he closed in fifth, and a little disappointed. Still, he is tied for second place in the championship, alongside his teammate, with 36 points.

The first official Ducati appeared only in sixth, with Francesco Bagnaia, followed by Suzuki’s Joan Mir, KTM’s Brad Binder and Bagnaia’s teammate, Jack Miller, in ninth. Miller had an “encounter” with Mir, and almost threw him off the track, at the exit of the last corner onto the main straight, with only a few laps to go. After analysis by the commissioners, no punishment was applied.

And to close, the tenth position came from a team that is clearly showing an evolution, Aprilia. Aleix Espargaro had a great race, most of the time in fourth place. But in the end, after a few mistakes, he closed in tenth, just 5.3 seconds from the winner.

Fans of Valentino Rossi, now a Petronas Yamaha SRT rider, were a little sadder, as the veteran finished only 16th, after starting from 21st position (yes, that’s right, the penultimate).

See the race result in Doha:

MotoGP returns on April 18, with the Portuguese GP in the Algarve.