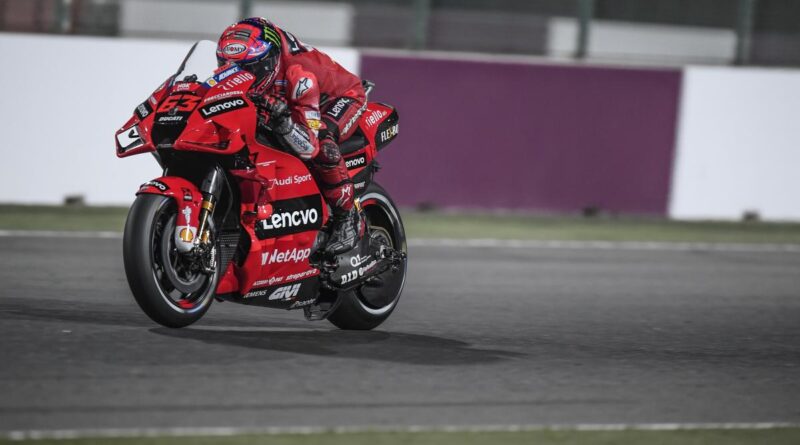 Francesco “Peco” Bagnaia, Ducati Lenovo Team rider in MotoGP, will start at the front row in the GP of Qatar. He broke the track record and took pole for this Sunday’s race.

Everyone expected his teammate, Jack Miller, to take pole, as he dominated almost every practice. The Australian unfortunately failed to make a good lap and starts from fifth position.

Who took advantage of the “ride” from Bagnaia was “The Doctor”, Valentino Rossi (Petronas Yamaha SRT), who used all the vacuum generated by his ‘student’ to set a great time and start from fourth position.

Honda, with the absence of Marc Marquez, will not have an easy life tomorrow. The “best” placed was Pol Espargaro, who starts from 12th position. If we consider the satellite team, Takaaki Nakagami (LCR Honda Idemitsu) did a little better, and starts from 11th position.

Aleix Espargaro (Aprilia Racing Team Gresini) had a great time with the new Aprilia and starts from 8th position, ahead of the two Suzuki.

Anyway, the race for the Barwa Grand Prix of Qatar takes place this Sunday, March 28, at 8pm local time (GMT+3).