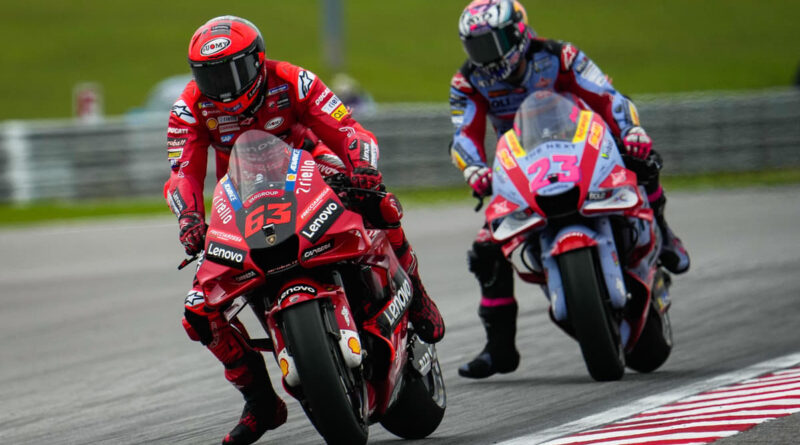 Francesco Bagnaia, Ducati Lenovo Team’s MotoGP rider, won the Malaysian GP, this Sunday, after a spectacular start and a fight with his future teammate, Enea Bastianini (Gresini Racing), and ‘put a hand and a half on the title’, with only one race left in the season.

His rival Fabio Quartararo (Monster Energy Yamaha MotoGP), also made a great start, finished third and still dreams as, mathematically, he still has a chance, despite being very difficult.

The start was frenetic, with Bagnaia jumping from P9 on the grid to P2 in the first corner. Quartararo also did something similar, starting from P12 and taking P5 on the first lap.

The Ducati rider tried to follow the leader and pole position Jorge Martin (Prima Pramac Racing), but he saw that the Spaniard’s pace was too strong and decided to reduce a little. Martin risked too much and ended up crashing, leaving Bagnaia the lead.

With that, the Italian managed to put his rhythm, but he had a very strong rival who followed him very closely, his future teammate, Bastianini. The Gresini rider, despite respecting the official Ducati rider, didn’t take long to get inside and take the lead in the race. But he couldn’t open it and, with that, with a few laps to go, Bagnaia regained the lead to cross the finish line in first, scoring another victory of the season and taking a huge advantage to Valencia, where the last race of the 2022 season takes place.

At a certain point in the race, he had the possibility of becoming World Champion in Sepang, as Marco Bezzecchi (Mooney VR46 Racing Team Ducati), came to threaten Quartararo’s position, and if he overtook him, he would help Bagnaia to leave Malaysia with the title, but he lost performance at the end, and finished fourth.

Quartararo didn’t give up, he gave everything he could, he even managed to get ‘close’ to Bastianini, but he finished third, and is 23 points behind Bagnaia, with a very small chance of taking the title in Valencia. His situation is this: he needs to win and Bagnaia can’t get 14th or better.

So, barring a ‘disaster’ at the last race, Bagnaia will be the 2022 World Champion, giving Ducati the long-awaited title.

Anyway, the race in Malaysia, despite not having many disputes and changing positions on the track, was tense, since any mistake by Bagnaia and Quartararo could decide the title.

See the Championship standings after the race in Sepang: