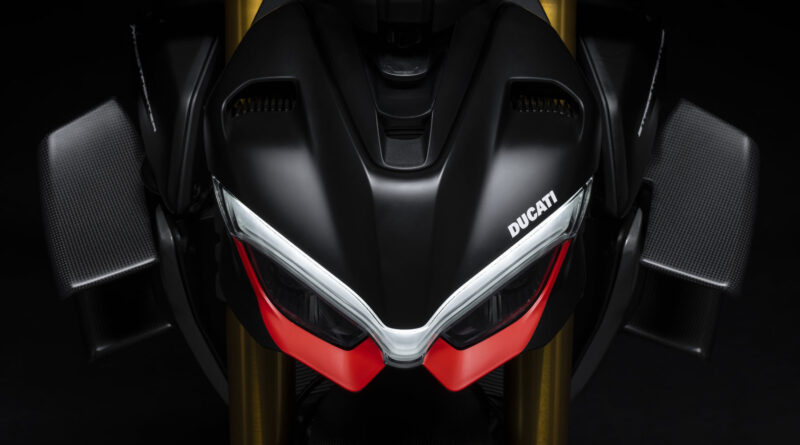 Ducati has launched in Europe the new 2023 Streetfighter V4 and V4 S, its 1,100cc ‘Hyper Naked’, which arrives with electronic improvements already featured on the 2023 Panigale V4, to remain one of the fastest bikes in its category.

In addition, the company presented the new Streetfighter V4 SP2, an exclusive model in a numbered version, which comes with carbon wheels, Brembo Stylema R brake system and differentiated paintwork, to be the ‘naked’ motorcycle choice for the tracks.

For those who don’t know, the name of the bike is a tribute to the streetfighter culture, delivering characteristic elements such as wide and high handlebars, mid-position pedals, aggressive and minimalist design and lots of power.

Speaking of design, it remains the same as it was presented in 2019, but still very current, with minimalist lines and which, according to the company, was inspired by the Joker, yes, that’s right, the comic book character from DC Comics.

In terms of colors, the 2023 Streetfighter V4 S has gained a new option, called Gray Nero, a mixture between gray and the various shades of black. On the other hand, the V4 SP2 version, features the Winter Test scheme, inspired by winter testing motorcycles (preseason test) in MotoGP and WorldsBK.

As with the 2023 Panigale V4 range, the 2023 Streetfighter V4 versions have gained electronic improvements that are the latest technology available at the Borgo Panigale factory.

To improve stability, precision and directionality in braking and cornering, the 2023 Streetfighter V4 receives new Engine Brake Control (EBC) EVO 2 software, which features a different calibration from gear to gear at each of three selectable levels.

In addition, it also received a new strategy for the Ducati Quick Shift (DQS), improving the fluidity of shifting in all degrees of throttle opening.

In addition, this SP2 version is equipped with the STM-EVO SBK dry clutch, which guarantees better anti-hopping function, even in the most aggressive downshifts.

The 2023 Streetfighter V4 and V4 S models will be available in Ducati dealerships starting from January 2023, while the V4 SP2 version will arrive starting from March 2023.