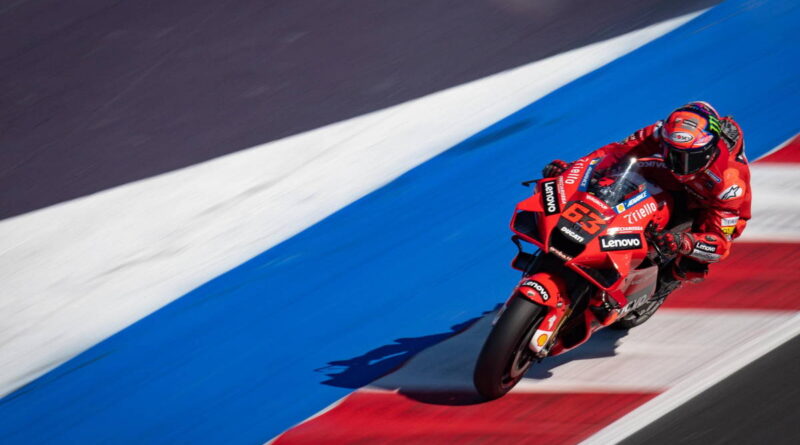 Ducati Lenovo Team rider Francesco Bagnaia will start at the front at the San Marino GP in MotoGP. He broke the Misano track record and for the third time this year is in first place for this Sunday’s race.

It was a perfect Saturday for the Ducati team, as their two riders occupy the top two starting positions. Jack Miller was more than two tenths of the Italian’s time.

Bagnaia did 1:31,065 and said, in an interview after qualifying, that the bike ‘was working perfectly’, which allowed him to set an excellent time. The same feeling had Miller, who congratulated his teammate because he is riding impeccably.

Starting in third is Monster Energy Yamaha MotoGP Team’s Fabio Quartararo, who crashed at the entrance to turn 1 when trying a very fast lap to challenge Bagnaia. He is leading the championship with a 53-point advantage over Bagnaia and will try, on Sunday, not to give in so much.

The dispute for the other positions was also very fierce. Repsol Honda Team’s Marc Marquez, who had to compete in Q1, was looking for a front-row position, but crashed when he was following Miller. He starts from seventh position and has already said that the Misano track is where Honda returns to its current ‘normal’ (difficulties).

Then, opening the second row is Jorge Martin (Pramac Racing Ducati), in fourth, with his teammate Johann Zarco, beside him in fifth, and Pol Espargaro (Repsol Honda Team) in sixth.