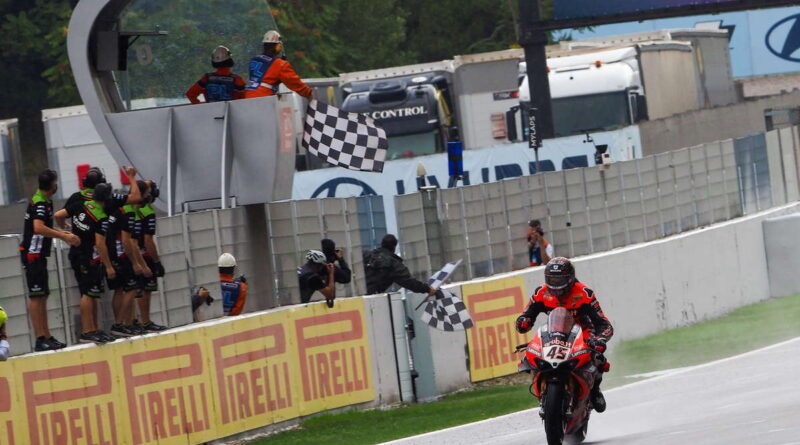 Ducati rider Scott Redding won race 1 this Saturday in Catalunya, Spain, for the WorldSBK World Superbike Championship. The British rider made a recovery race on a wet track and led the Ducati trio who finished on the podium.

It was Ducati’s first triple podium since 2012 in the category, with Redding first, Motocorsa Racing satellite rider Axel Bassani second (his first podium in the category in his rookie season), and Michael Ruben Rinaldi third.

Bassani celebrated a lot and said, after the race, that he cried throughout the last lap. He is the youngest rider on the grid at 22 years old.

Rea at some point opened more than 2 seconds of advantage, leaving the fight for the other positions. Who came to fight Toprak was Axel Bassani who, despite being very young, showed great strength and maturity. It was a festival of overtaking between the two until they both managed to reach the leader, who was already starting to show problems.

Halfway through the race, Rea couldn’t hold them both, and dropped to third. At this point, Toprak’s bike had technical problems and he had to retire, leaving the lead of the race to the Motocorsa rookie.

From the middle of the race, both Redding (who got to be 14th and didn’t think it was his day) and Rinaldi started doing very fast laps and overtaking their opponents. It didn’t take long and they reached the six-time champion, not finding it too difficult to overtake him.

Redding managed to overtake Bassani and lead the race, crossing the finish line first, scoring 25 points and reducing his championship deficit to 53 points.

The leader is now Rea who, with Toprak’s abandonment and with the points of fourth place, has a 6 point advantage over the Turkish.

Finally, race 2 and the superpole of the WorldSBK Championship, takes place this Sunday, September 19, in Catalunya, Spain, at the Circuit de Barcelona-Catalunya.