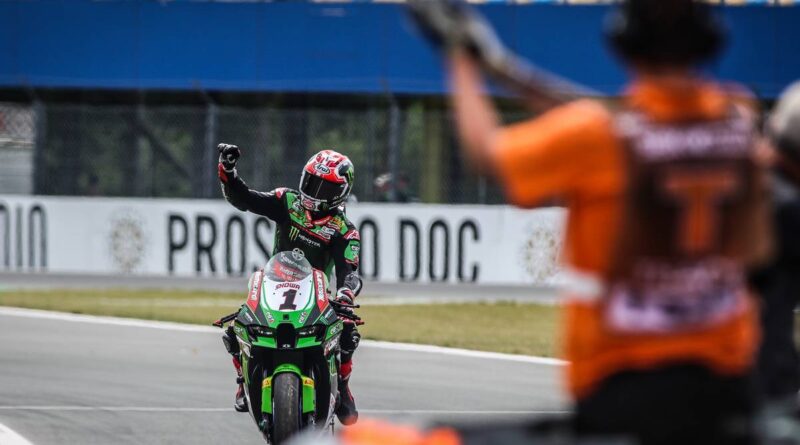 He beat Scott Redding (Ducati) and Toprak Razgatlioglu (Yamaha) on a track that was treacherous and took down several riders. With two laps to go, Jonas Folger (BMW) crashed and ended up forcing a red flag.

With that, Rea, who preferred the softest tires available – SCX (and wears faster), had a little easier life, as in the final laps he could be attacked by the Ducati and Yamaha riders, who chose ‘soft’ tyres – SC0 (a little harder and less wearable than SCX).

Although the race was a little easier at the end, the six-time champion suffered a bit at the start, with pressure from Toprak and also Redding. He even lost the lead to the Turkish, but recovered and, after a small ‘error’ by Redding, managed to open more than 2 seconds.

With this advantage, it was just a matter of administering and taking care of the tires, to cross the finish line first. This was Rea’s 13th victory at Assen, which returned him to the championship lead by just 7 points.

The home rider Michael Van Der Mark (BMW) had a great race. He started from ninth position and, after a lot of fighting and benefiting from crashes, he managed to finish fourth.

Two other riders who had a spectacular race were Garrett Gerloff (GRT Yamaha) and Tom Sykes (BMW). Sykes went from penultimate (after having a technical problem in qualifying) to finish seventh. Gerloff, after crashing in the qualifying and having to start in the last position, finished the race in sixth.

So, with the victory this Saturday, Rea took the lead and opened up a 7-point lead over the second, Toprak.

Finally, the Superpole race and race 2 of the WorldsBK Superbike World Championship, takes place this Sunday, July 25, at Assen, Netherlands.