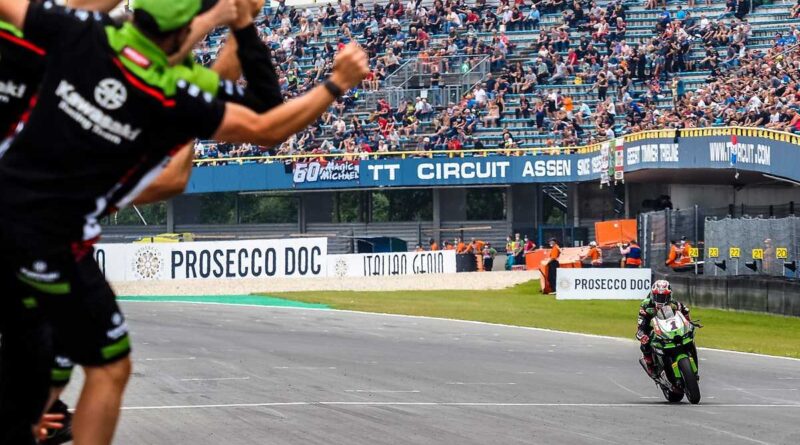 Kawasaki rider Jonathan Rea dominated the weekend at Assen, winning all three races of the round, for the WorldSBK world superbike championship, and regained the lead in the championship, opening an advantage to second, Toprak Razgatlioglu (Yamaha), who crashed in race 2 and failed to score.

The weekend was perfect for the six-time Kawasaki champion as he took pole position and won all three races, making the most points available.

In race 2, this Sunday, Rea didn’t start well, he dropped to fifth place, but he was slowly recovering, until he got past the leader (and highlight of the race), Andrea Locatelli (Yamaha).

The Yamaha rookie rider had a spectacular race as he moved from fourth position and took the lead on the first lap. He managed to be first for a good part of the race but, as he chose the softest tires available – SCX, (which wear out faster), he had problems in the final laps and was unable to hold on to the six-time champion. He also lost second place to Scott Redding (Ducati), but managed to finish on the podium.

Disaster happened to the title challenger Toprak, who had contact with Garrett Gerloff (GRT Yamaha) in the first corner, ended up crashing and did not score. Gerloff received a penalty and had to go through the pits (ride-through), ended up crashing trying to overtake and retired.

Alvaro Bautista (Honda) was another rider who stood out in race 2. He started in 12th place and finished fifth. A good recovery as he crashed in race 1 (on Saturday) and in the Superpole race.

Michael Van Der Mark (BMW) had a similar performance to Bautista, as he started in 11th place to finish sixth. His teammate Tom Sykes was trying to make some overtake to finish seventh, but crashed and crossed the line in 15th position, scoring just one point.

So, with the results of this weekend, Rea takes the lead in the championship, and opens a big advantage for the second, Toprak.

Finally, the World Superbike Championship WorldSBK takes place from August 6th to 8th, with the Czech Republic round, at the new racetrack Autodrom Most.