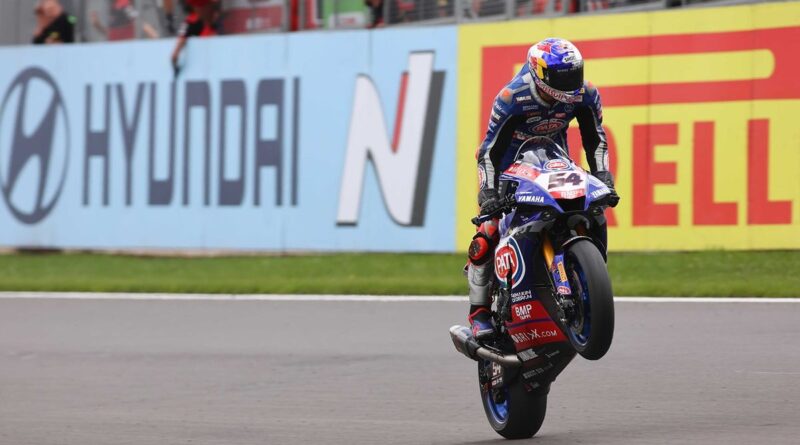 Toprak Razgatlioglu, a Yamaha rider, won race 2, this Sunday at Donington Park, UK, for the WorldSBK world superbike championship, and took the lead, as Jonathan Rea (Kawasaki) crashed and failed to score.

Sunday began with a victory for the six-time Kawasaki champion in the Superpole race. Razgatlioglu came out from 13th place and finished sixth, which was his starting position in race 2.

Both riders started well in the last race of the day, with the Turk taking second place at the first corner. He positioned himself behind Rea and kept in touch the entire time.

When he saw an opportunity, he put it inside and started to lead, but he couldn’t open up the advantage. Rea remained very close, just waiting for an opportunity to retake the lead.

And it came, with a mistake by Razgatlioglu, the Kawasaki rider took the lead again and quickly managed to open up a small advantage. But, a few laps later, the Yamaha rider was already very close again, putting pressure on the then-championship leader.

With that, Rea was trying to get the most out of the super-soft tires (SCX) and ended up going overboard. He lost the front of the bike and fell, landing in the gravel box. He managed to get up and get back into the race, but it was too late, finishing last.

Who “thanked” was Razgatlioglu, who only had to manage until the checkered flag. With that, the Turk took the lead in the championship, by just 2 points. The ‘fight’ will get even hotter in the next races.

Yamaha also finished second on the podium with Garrett Gerloff (GRT Yamaha), who had a competitive weekend despite his crash in race 1 (even so, he finished seventh). It was his best result of the 2021 season.

BMW on the podium

The BMW Motorrad WorldSBK team was the highlight over the weekend, as it got a double podium (second and third places) in the Superpole race and another podium (third place) in race 2.

In race 1, on Saturday, the team didn’t have a bad result either, as it got fourth and fifth places.

It has been showing a huge evolution and the drivers, Tom Sykes and Michael Van Der Mark, are very optimistic to fight for the podium and even for some victory.

Sykes was all smiles on the podium with third place in race 2. The Brit has been raving about the new BMW M 1000 RR bike and its evolution. Of course, he knows it still has points to improve to put him in a position to fight for a win.

Ducati were the disappointment this weekend despite Scott Redding’s fourth place in race 2. The Brit crashed in race 1 and finished the Superpole in 18th place. His teammate Michael Ruben Rinaldi finished race 1 in 12th, the Superpole in tenth and race 2 in eighth.

Chaz Davies, rider of the independent Team GoEleven Ducati, was 11th in Race 1, 8th in Superpole and 7th in Race 2.

So, with this weekend’s results, Razgatlioglu takes the lead in the championship, but with a slight advantage over second, Rea.

Finally, the WorldsBK Superbike World Championship, returns from the 23rd to the 25th of July, with the Dutch round, at Assen.