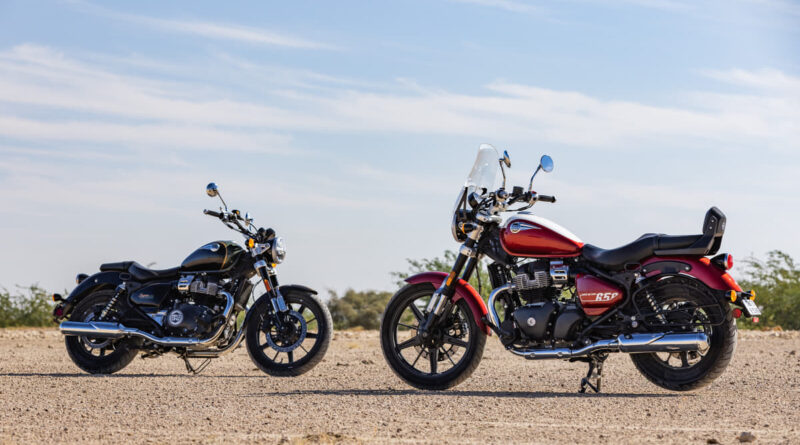 Royal Enfield launched in India and Europe the 2023 Super Meteor 650, its newest 650cc cruiser, which arrives with the twin-cylinder engine already used in the Interceptor 650 and Continental GT 650, to be one of the best options in its segment.

The model was revealed at the EICMA (Milan Motorcycle Show) in November 2022, and arrives in two versions: Super Meteor 650 and Super Meteor 650 Tourer, the latter with accessories such as a windshield and lumbar backrest for the passenger (sissy bar).

“The Super Meteor 650 is the evolution of all the focus and efforts we have put into the mid-capacity segment over the last few years and is a retro cruiser, authentic in every detail. Design, geometry, shape and the incredible 650cc twin-cylinder combine to make this motorcycle deliver an incredible experience on the road and on the street. We’ve taken the refinement of this bike even higher and you can feel it in the smooth throttle response in any condition. Stability is one of the strengths of the Super Meteor 650, which easily negotiates curves and stands firm on stretches of straight roads. It is a medium displacement motorcycle with so many attributes that even those who never thought of owning a cruiser will be interested in it. We believe the Super Meteor 650 will expand the market for cruisers around the world and take Royal Enfield’s twin platform to an even higher level,” says Siddhartha Lal, managing director of Eicher Motors Ltd.

“We have always focused not only on producing unique motorcycles, but on reimagining concepts that transcend traditional segments. The Meteor 350, which replaced the Thunderbird 350 in our lineup, has done this by making road riding more accessible for thousands of riders around the world, and what’s more, it has become one of our best-selling motorcycles in Europe and beyond globe locations. The Super Meteor 650 breathes new life into the premium cruiser segment and creates an identity of its own as a mid-displacement cruiser that is both authentic and affordable,” said B Govindarajan, CEO of Royal Enfield.

In addition to the engine, one of the highlights of the new Super Meteor 650 is the Upside Down front suspension, the first time that this high-performance item has been used on a Royal Enfield motorcycle. The suspension set, together with the new chassis, makes the Super Meteor 650 stable and offers a pleasant ride on the roads, in addition to transmitting lightness and confidence in the winding stretches.

The bike’s look is classic, allowing a lot of customization, and 15.7 liters the fuel tank offers a lot of autonomy, so you can only worry about riding.

In addition, it has aluminum alloy wheels measuring 16″ at the rear and 19″ at the front, fitted with wide tubeless tires. This configuration guarantees a relaxed ride and it is very easy to put both feet on the ground, with the low seat.