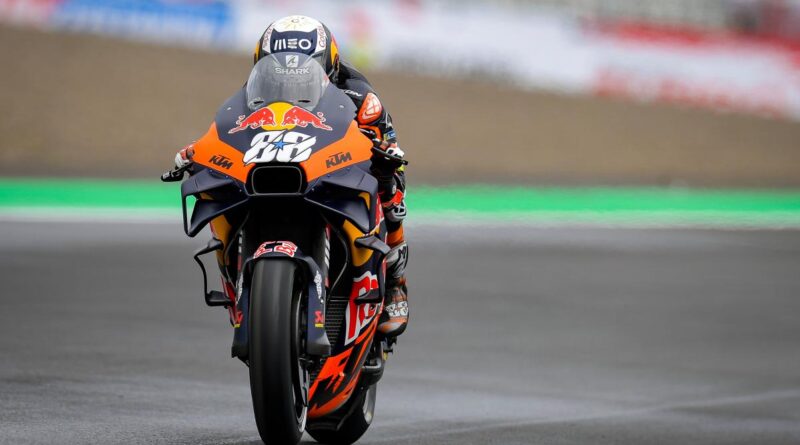 Miguel Oliveira, a Red Bull KTM Factory Racing MotoGP rider, won the Indonesian GP on Sunday in a race with a track soaked by torrential rain at the new Mandalika circuit.

The race started with a lot of delay and was shortened to 20 laps because of the track conditions, marking the return of the category to the Asian country, after more than 25 years.

The Portuguese made a practically perfect race and did not give chances to the competition. He started from seventh position but, in the first corner, he was in second place behind Jack Miller (Ducati Lenovo Team). It was a perfect start.

It didn’t take long for him to overtake and open an advantage. From there, it was just managing and walking away with the win, going down in history as the first MotoGP rider to win at the Mandalika track.

The dispute on the track was for the other places on the podium, with several changes of positions between the riders. Who managed to leave with the second place was Fabio Quartararo (Monster Energy Yamaha MotoGP) who, despite starting on pole, lost several positions but managed to make a great recovery race.

Third place on the podium was won by his compatriot Johann Zarco (Pramac Racing) who had a similar race. He started from third position, lost some at the start but managed to recover.

Jack Miller, despite the excellent start, starting from ninth position and taking the lead in the first corner, lost a little performance and finished fourth.

The Repsol Honda Team had a bad weekend. Marc Marquez, after having fallen twice in qualifying, also fell in the Warm-up (a bad fall, being practically ejected from the bike), was taken to the medical center and declared unfit. He was left out of the race and, on social media, said he is fine, just a little dizzy. His teammate Pol Espargaro competed but only managed to finish 12th.

Anyway, Enea Bastianini (Gresini Racing MotoGP) is still the leader of the championship, with 30 points, and Brad Binder the second, with 28 points. Quartararo and Oliveira climbed several positions and occupy, respectively, the third and fourth positions in the championship.

See the championship standings after the Indonesia race:

MotoGP returns on April 3, with the GP of Argentina, at the Termas de Rio Hondo circuit.