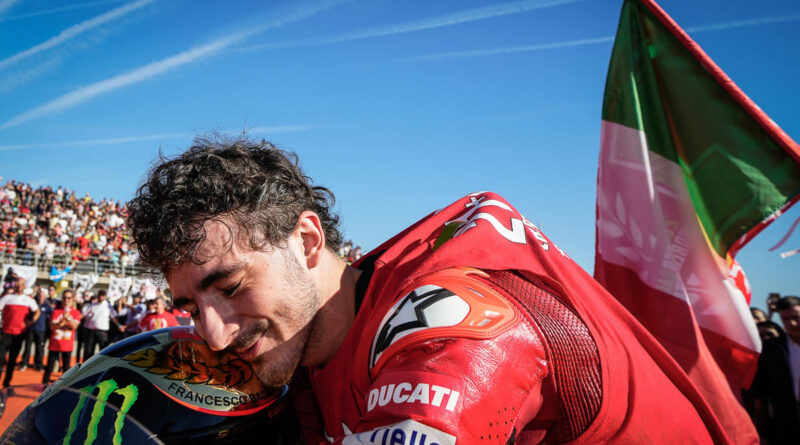 Francesco Bagnaia, a MotoGP rider for the Ducati Lenovo Team, was crowned the 2022 World Champion this Sunday after finishing ninth in the final race of the 2022 season in Valencia.

His rival Fabio Quartararo (Monster Energy Yamaha MotoGP) needed to win the race to still have a chance and even if he did win, he had to hope the Italian didn’t score. But despite fighting a lot, he didn’t make it, he finished fourth and the title went to the Italian team.

Despite having a huge advantage and not needing to take risks, Bagnaia went all out against his rivals and, even in the first few laps, was fighting for the lead. He came into contact with Quartararo and ended up losing a piece of the right side wing, which affected his rhythm a little.

With that, he had to manage, he was losing some positions, but he managed to finish ninth to take his first title in the premier class, and give Ducati the first riders’ title after 15 years.

In addition, he achieved another historic fact: he was the first Italian rider with an Italian motorcycle to be World Champion after 50 years, when Giacomo Agostini won with the MV Agusta.

The race in Valencia was won by Alex Rins with Suzuki, this being, therefore, the last appearance of the Japanese brand, as they decided to leave the category.

Now, the MotoGP circus goes on vacation, but before that, they carry out tests in the same circuit in Valencia, on Tuesday (08).

See the Championship standings after the race in Valencia:

MotoGP returns from March 24 to 26, 2023, with the Portuguese GP, at the Algarve International Circuit.