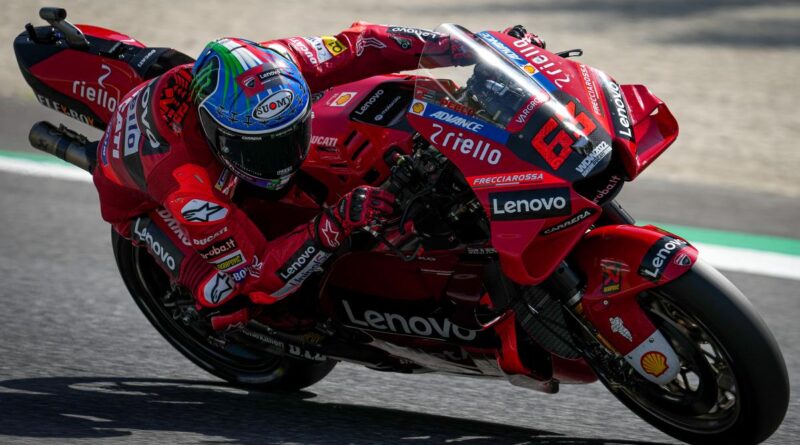 Francesco Bagnaia, Ducati Lenovo Team rider in MotoGP, won the Italian GP this Sunday after holding off reigning champion Fabio Quartararo (Monster Energy Yamaha MotoGP), who said in an interview that he had the best race of his career.

The Ducati Italian, racing at home, had a great race, despite having lost some positions at the start. He managed to recover, take the lead and lead until the end, to the victory.

But it was not a smooth race for him, as Quartararo was also having an excellent race. The Frenchman got a good start and on the first lap he was fighting for the podium. It didn’t take long and he was already in second, but was overtaken by Bagnaia. The Italian passed Marco Bezzecchi (Mooney VR46 Racing Team) and took the lead. Then Quartararo took second place and from there he put pressure on the Ducati rider.

Despite pushing, he couldn’t get too close to try to overtake in the center of the circuit, as on the straights, Ducati was much faster.

The second place was very good for Quartararo as his main rival, Aleix Espargaro (Aprilia Racing), finished behind him, in third, thus managing to open a little more advantage in the lead of the championship.

Aleix also had a great race, as he started from seventh position and had to fight hard to overtake several Ducati, among them Bezzecchi, Luca Marini (Mooney VR46 Racing Team) and pole position Fabio Di Giannantonio (Gresini Racing).

Anyway, the race was very hectic and there were several overtakes, with two rookies coming out of the first two positions, something that hasn’t happened since 2008. Quartararo remains the leader of the championship, with 122 points, and Aleix Espargaro is second, with 114 points. Next stop: Catalunya GP.

See the Championship standings after the race in Mugello:

MotoGP returns on June 9, with the GP of Catalunya, at the Barcelona-Catalunya circuit.