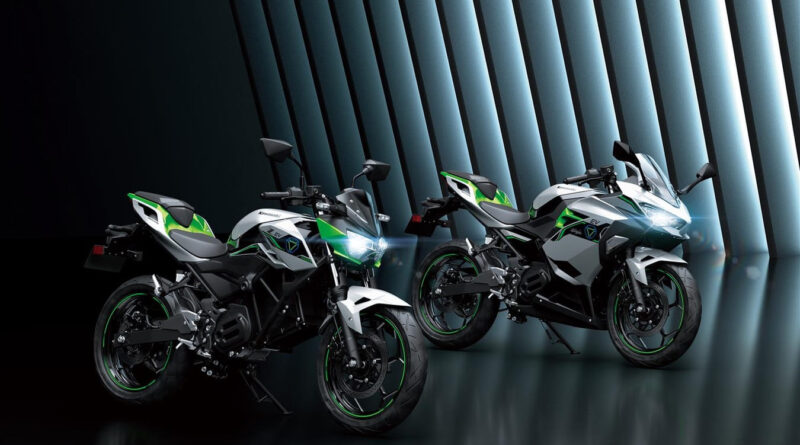 Kawasaki presented at EICMA 2022 (international motorcycle and accessories exhibition, which takes place in Milan, Italy), two electric motorcycles that will be launched in Europe in 2023, the Z EV and the Ninja EV.

The models have a design very similar to others that already exist, but which are powered by combustion: the ‘naked’ Z400 and the sporty Ninja 400. They are identified as fully electric by the ‘EV’ letters on the sides (which mean ‘Electric Vehicle’).

According to the company, the new battery-electric models with a maximum capacity of 3.0 kWh are intended to meet the needs of motorcyclists in Europe’s cities, and will go on sale in 2023.

In the released images, the models are practically with their final finishes, with details in the brand’s traditional green color, and the Kawasaki logo in its ‘green’ version (for electric and hybrid vehicles).

Furthermore, we can notice that the engine is central and the final drive is by chain, but there is no gearshift pedal or clutch lever.

The Kawasaki Z EV is the brand’s electric ‘naked’ motorcycle with the battery almost completely exposed. The Kawasaki Ninja EV, on the other hand, is sporty for daily use and has fairings that cover practically everything.

Anyway, Kawasaki did not disclose more technical details of the models but recently registered an electric motorcycle with a power of 11 kW. So, it could be that both models presented at EICMA have that power, which will allow them to reach a top speed of up to 140 km/h.

Kawasaki took advantage of the occasion and presented a hybrid motorcycle, that is, one that has an electric motor and a traditional one powered by combustion. In addition, it also presented a hydrogen-powered one, with the cylinders stored in the side cases positioned at the rear of the motorcycle.

The hybrid bike has characteristics of a sports bike, and is based on the Ninja 650. It features the same design, but with a larger front part to accommodate the battery and other components.

Thus, this model has a traditional combustion engine and an electric motor. According to them, these engines can be used separately or together, that is, in places where combustion vehicles are restricted, it could operate only in electric mode. In other cases, you could combine the two to extract maximum power and torque, providing a very sporty ride.

Finally, Kawasaki ended by saying that it is actively involved in partnerships that are not limited simply to the two-wheel world, but encompass automotive and other future-oriented technologies.