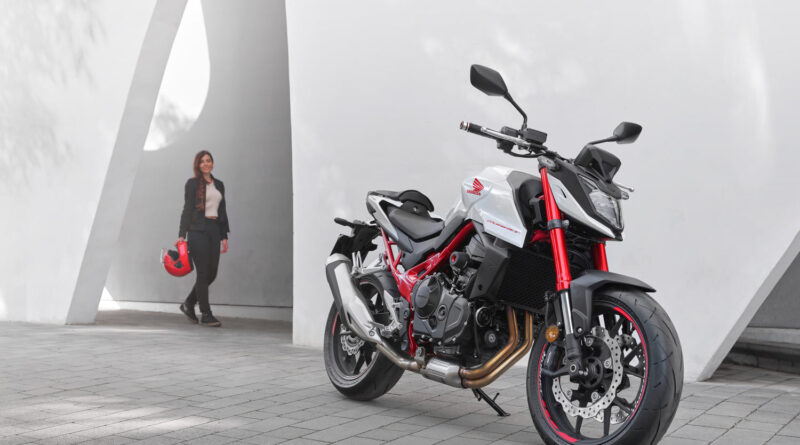 Honda has launched in Europe the new 2023 CB750 Hornet, its newest 750cc ‘naked streetfighter’ motorcycle, which arrives with a 90 HP twin-cylinder engine and an overall design reminiscent of the smaller ‘sister’ CB 500F.

So, to the disappointment of some, the new Hornet does not have the 4-cylinder engine that was the main feature of the previous models, but it arrives with much more embedded technology, for a whole new generation of riders.

Despite the extremely aggressive and futuristic sketches, the design of the 2023 CB750 Hornet is a little simpler and very reminiscent of the smaller ‘sister’ CB 500F. Of course, it brings some of its own sharper lines, with a very fluid design, from front to rear.

The front optics are very similar to the 500cc bike, but a little more compact, with sharp angles and lines. On top of it is the new color TFT panel.

The fuel tank has aggressive lines and has small fairings on the sides that evoke all the sportiness of the model.

Finally, the rear is almost the same as the CB 500F, without much daring, but at least it has its own flashlight, which sticks out, breaking the sameness and passes more aggressiveness.

The new 2023 Honda CB750 Hornet arrives with an extremely compact and lightweight chassis, achieved through a technological process of stiffening, thinning the main/bottom tube and optimizing the pivot shape, to produce an extremely strong platform, with a balance of rigidity and flexibility.

In addition, all suspension and brakes on the new bike are high-performance items and are intended to increase sporty handling performance. At the front, it is equipped with an USD 41mm Showa SFF-BP (Separate Function Fork Big Piston) fork. At the rear, it features the damper connected to the steel swingarm via Pro-Link with 5-stage preload adjustment.

The 2023 CB750 Hornet hits the market with a new engine made especially for this bike. According to the company, it’s designed for all riders to explore to the fullest, with ‘exciting’ peak power output, but also to offer affordable low to mid-range usability.

It works in conjunction with a 6-speed gearbox equipped with an assist and slipper clutch. According to Honda, the new bike is capable of reaching up to 205 km/h.

In terms of technology, the new 2023 Honda CB750 Hornet does not lag behind the competition and comes as standard with Throttle By Wire, 4 riding modes (RAIN, STANDARD, SPORT and CUSTOM), 3 levels of Engine Power, Engine Brake and HSTC (Honda Selectable Torque Control) with integrated Wheelie Control.