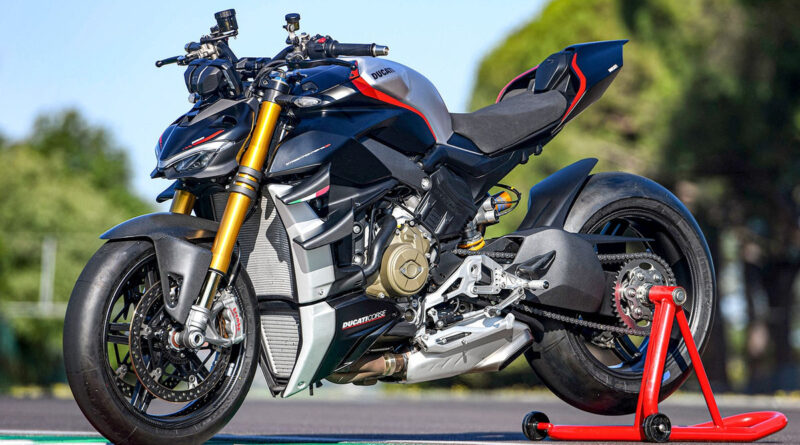 The new Streetfighter V4 SP is practically a ‘naked’ version of the supersport Superleggera V4. The bike’s name pays homage to the streetfighter culture, delivering characteristic elements such as wide and high handlebars, mid-position footpegs, aggressive and minimalist design and lots of power.

One of the differentials of this new version is the use of carbon wheels that are 1.4 kg lighter than those used in the V4 S, and that contribute to a total reduction of 3.4 kg.

Another highlight, clearly visible, is the new color scheme which, according to the brand, is based on the winter test bikes (pre-season test), both in MotoGP and in the WorldSBK.

The Matte Black of the fairings combined with the Matte Carbon finish of rims and wings, contrasts with the Red accents and the brushed aluminium fuel tank. Furthermore, it is enriched with some beautiful details such as the serial number printed on the handlebars and the color scheme of the Italian flag on the carbon wing tips.

The Ducati Streetfighter V4 SP has Full-LED lighting, and the headlight unit is minimalist, inspired by the Joker, yes, that’s right, the character in the comics by DC Comics.

In this SP version, it is equipped with the STM-EVO SBK dry clutch, which guarantees a better anti-hopping function, even in the most aggressive downshifts, and greater fluidity during all ‘off-throttle’ stages.