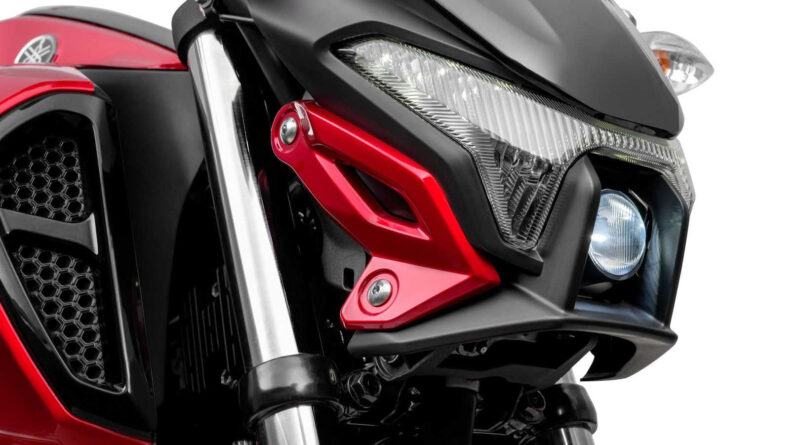 Yamaha has launched in Brazil, the 2023 Fazer FZ15 ABS, its new 150cc motorcycle, which comes with big bike features to dominate the demanding Brazilian segment that has been growing worldwide.

Available in three colors (Racing Blue, Magma Red and Midnight Black), the new model arrives at the brand’s stores in early September and its suggested public price is R$ 16,990 (about US$ 3,331).

The new 2023 Yamaha Fazer FZ15 ABS is a motorcycle based on another model of the brand sold in the Indian market, the 150cc FZ-FI, with a muscular and aggressive design, and a sporty but comfortable riding position.

Its size is large and it is very similar to the well-known FZ25 ABS. Unlike the Indian model, the FZ15 ABS received a frontal optical set similar to the 250cc FZ25 and uses the same engine as the Factor 150 and Fazer 150, two 150cc motorcycles sold locally by Yamaha in Brazil, which we will talk about below.

Finally, the design is complemented with full-bodied fairings, large ‘air inlets’ on the sides of the tank, tank cover that mimics aviation style, LED lighting in the headlight and very wide tires, with practically the same measurements as of the 250cc bike.

The 2023 Yamaha Fazer FZ15 ABS can be considered an FZ25 with a 150cc engine, as it comes with a diamond-shaped chassis, a 41 mm diameter telescopic front fork, and the important Monocross rear suspension, which allows a fine adjustment between comfort and sportiness.

In addition, it is equipped with 17-inch aluminum alloy wheels, and very wide tires for a 150cc model and which have practically the same measurements as the FZ25: 100/80-17 at the front and 140/60-17 at the rear. It leaves the factory with Pirelli Diablo Rosso II tires.

Finally, the FZ15 is equipped with disc brakes on both axles (282 mm at the front and 220 mm at the rear) and ABS brake on the front wheel, which prevents locking on slippery floors, increasing safety.

Yamaha preferred to equip the new Fazer FZ15 ABS with the same engine as the Factor 150 and Fazer 150, giving priority to reliability and consumption, since it is BlueFlex (that is, it can use gasoline and Ethanol in any proportion) and has an electronic fuel injection.

The new 2023 Fazer FZ15 ABS has technologies present in larger models, such as the aforementioned LED lighting in the headlight and taillights (brings DRL for daytime running lights and LED projector for the high and low beam), monoshock suspension at the rear and ABS brake at the front.

In addition, it is equipped with a 100% digital LCD panel, very similar to the FZ25, with complete information, including gear indicator, speedometer, tachometer, fuel level and partial and total odometers.

The 2023 Yamaha Fazer FZ15 ABS is a motorcycle for those who want a low-displacement urban model but with larger motorcycle design and technology, with a slightly sportier, but comfortable ride, and safety guaranteed by ABS.

It is an excellent option for those who still don’t have all the money to buy the FZ25 ABS, but want something better than the Factor 150 and the Fazer 150 or any other low displacement and cheap motorcycle.

For more information about Yamaha Motor US, access https://www.yamahamotorsports.com/motorcycle.

MotoGP has announced that India will host a World Championship stage in 2023, at the Buddh International Circuit, as the

MotoGP will race in Kazakhstan in 2023, in the heart of Central Asia

BREAKING: Remy Gardner will be a Yamaha rider in WorldSBK in 2023

Triumph has announced that it will participate in the FIM Motocross World Championship in 2024 with an official team, the

Ducati has launched in Europe the new 2023 Multistrada V4 Rally, its most extreme adventure motorcycle, which arrives full of