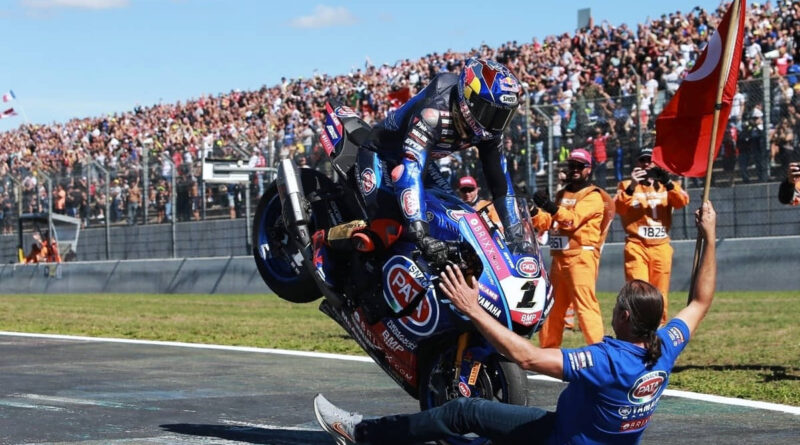 Yamaha rider Toprak Razgatlioglu won race 2 this Sunday at the Nevers Magny-Cours circuit, in France, for the WorldSBK Championship, and took the runner-up lead in the championship.

The Turk, who also won the Superpole race, had to battle Michael Ruben Rinaldi (Ducati) and Axel Bassani (Motocorsa Racing) in Race 2, but managed to hold off both Ducatis and win at the French track.

But the most discussed topic was the retirement of the championship leader, Alvaro Bautista (Ducati), after being knocked down by the six-time World Champion, Jonathan Rea (Kawasaki), at the beginning of the race.

Bautista, who started from second position, took the lead in the first corner, but was unable to open, and had to withstand pressure from Toprak and Rea. A few laps later, the Turk managed to pass him and Rea glued in behind the Spaniard.

Not wanting to waste too much time, the Kawasaki rider tried a risky maneuver on Bautista, but ended up hitting the side of the Ducati, knocking him to the gravel. Bautista had no way to come back and retired, losing 25 precious points. He even opened a good lead in the championship, as he had won race 1 (with Toprak and Rea going down and, with only the Turk scoring a few points) and came in second in the Superpole race.

Jonathan Rea was penalized with a long lap for the maneuver (whether it was intentional or not is subjective), and returned in seventh position. It didn’t take long to impose his rhythm and manage to overtake some opponents, to finish fifth. He didn’t lose as much with the penalty, but leaves France with another bad result.

With this collision, Axel Bassani took the opportunity to approach the Turk, and brought with him Michael Ruben Rinaldi, Bautista’s teammate. Bassani, who also rides a Ducati Panigale V4 R, but for an independent team, was performing well, and managed to overtake Toprak.

He led for several laps, giving the champion no chance to attempt a maneuver. But, with the wear of the equipment, he began to lose performance. That’s when Rinaldi came on strong, and as Toprak passed Bassani, he passed them both, and took the lead.

The official Ducati rider showed that he was determined to win the race, as he still didn’t have good results this season. But, as happened with Bassani, he was losing performance and, with that, he became an easy target for Toprak, who regained the lead and went for the victory.

Therefore, with the result of the weekend in Magny-Cours, Bautista is the leader with 332 points, Toprak the second with 302 and Rea the third with 285 points.

Anyway, the WorldSBK returns from the 23rd to the 25th of September, with the Catalunya round.