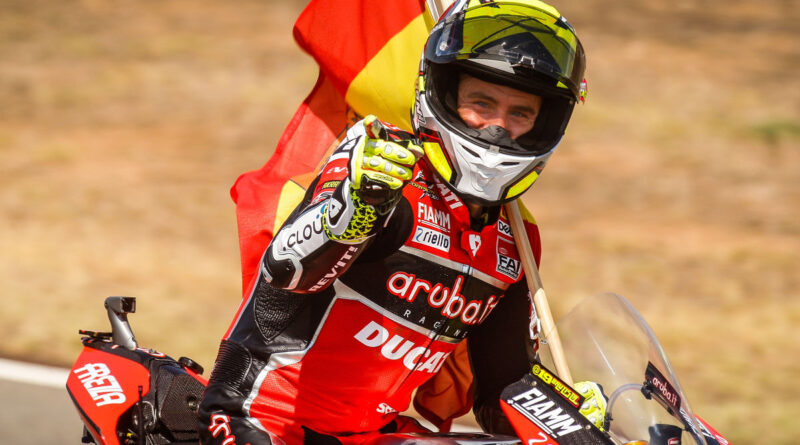 Alvaro Bautista, rider for the Aruba.it Racing – Ducati team in WorldSBK, has signed for another year and will race in the factory Ducati red also in 2023.

The Spaniard, who currently leads the championship by 36 points ahead of Jonathan Rea (Kawasaki), has secured a further one-year extension to his contract, which would now expire in 2022.

This is Bautista’s second stint at the Aruba.it Racing – Ducati team, with him arriving in the WorldSBK paddock in 2019 with the team. It was an overwhelming start, giving no chance to opponents as he won the first 11 races. In 2020, he moved to Honda, in an entirely new project, and led by HRC, the same team that takes care of the team in MotoGP. Despite having helped in the development of the bike, he did not get good results. So he decided to accept an offer from the old team and returned to Ducati in 2022.

This year, he has been showing good race pace and good physical shape, and appears to be in better condition, including mentally, than in the 2019 season.

Talking about the new deal, Bautista said: “I am very happy to be able to continue at least one more year with the Aruba.it Racing – Ducati team, which represents a family to me. I have always felt good with this team and since I have returned, the feelings have been even more positive than in the 2019 season. When something works so well, we can only keep working, looking ahead. I feel I am still at the top; I feel I can still give a lot. Physically and mentally, I think this is the best time of my career. I am also delighted to continue working with Ducati, a very important factory, tech-oriented, always looking for development: to be part of this project, of this team, is something incredible on a personal level.”

Team principal Stefano Cecconi also commented: “I have always believed in Alvaro from a sporting point of view, and we have always had a very good personal relationship even when our paths temporarily parted. When we decided to bet on him again last summer, some people called this move a very risky gamble, but there was a conviction on both sides that we were making the right choice: results so far confirm our decision and make us happy.

“This is also the reason why we are glad to continue our relationship with Alvaro for at least another year. Today we want to make a small exception to the rule, and we toast his renewal; already from tomorrow, we are going back to work to prepare ourselves in the best possible way for the next races. The season is still long, and we know very well that we cannot afford to let our guard down.”

Ducati Corse’s General Manager Luigi Dall’Igna shared his thoughts: “We are very happy to be able to continue together with Bautista in 2023. As in the 2019 WorldSBK season, this year, Alvaro has been immediately competitive with our bike, starting from the winter tests; he is now leading, not surprisingly, a wonderful season, fighting intelligently for the world title. He is a precise rider, easy to work with: his fantastic riding style is not only enjoyable to watch on TV, but above all, it is his key to fully exploiting the potential of our Panigale V4 R. We are convinced that together we can achieve many important goals.”

Anyway, WorldSBK returns from the 15th to the 17th of July, with the UK round.