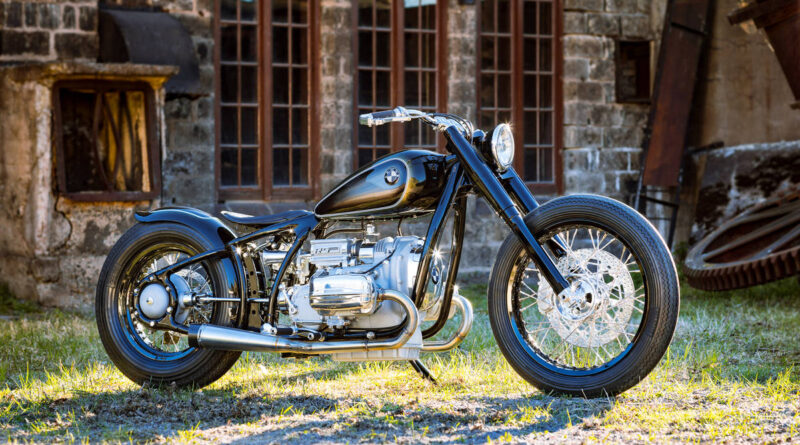 85 years ago, BMW Motorrad introduced the BMW R 5 to international audiences – an exciting new technological development that influenced motorcycle construction until the 1950s.

Inspired by the 1935 500cc racing machine, the R 5 was launched in 1936 to be one of the most innovative motorcycles of the decade. It was so bold, the bike had a design that looked like a custom model from the 50s.

Rudolf Schleicher was the engineer responsible for the project, the same man who designed the R 32, BMW’s first motorcycle. Its genius was in solutions unprecedented for the time, such as the telescopic front fork, an unprecedented technology that was launched in 1935 on the BMW R 12 and R 17. All this experience was applied to perfection in the design of the R 5.

The round-shaped headlamp was in an elevated position and seamlessly integrated with the front forks covered by the beautiful aerodynamic hoods, a styling detail that would last for decades. Drop-shaped, the fuel tank was anatomical and had two leg pads. Together, the frame and tank draw a continuous line from the steering wheel to the rear wheel hub, giving the side view a touch of elegance.

In terms of color, the classic BMW styling was represented in black with white stripes. Even the opposing two-cylinder engine was gorgeous, as were the exhaust ports with narrow tails. The delicacy was in detail like the handcrafted rear fender. The essentials have never been so well styled.

So memorable in the brand’s history, it was reissued in a modern version, a model that accentuated the retro feel typical of a custom motorcycle. To mark the motorcycle’s 80th anniversary, BMW Motorrad honored it at the Concorso d’Eleganza Villa d’Este 2016 with a special model: the BMW R 5 Hommage. The homage was built with the help of customizers Ronny and Benny Noren, who have over 30 years of experience in custom motorcycle design.

They were the ones who updated the original R 5’s styling in points like the more fluid frame and tank, the slanted headlamp and the absence of the front fender. The R5 Hommage further accentuated the ancestor’s retro roadside character. The fact is, the essence was kept, a proof that timelessness exists.

The mechanics of the R 5 Hommage are basically the same as the original, it only changes the use of a volumetric compressor. In the 1930s, that wasn’t even necessary. The R 5’s two-cylinder boxer engine was entirely new and generated 24 hp at 5,500 rpm.

The valves were actuated by two camshafts moved by chain. A novelty was the four-speed gearbox, the first foot-operated in the history of BMW, something that allowed the rider to always have his hands on the handlebars.

Following the brand’s tradition, the transmission was by cardan shaft. The result of all this technology was a top speed of 135 km/h, which made it almost as fast as the R 17 with 750 cm³ and 33 hp. For this reason, the R 5 was widely used in racing.

A perfect combination of a road bike as a traditional custom with a sport. The vocation for long distances was made clear by the options of saddle for the rump and an enviable sidecar.

Of course the structure was more than capable of handling the level of performance. The double cradle chassis had electrically welded oval tubes, which gave a high level of rigidity. To absorb the holes in the bad roads of that time, the front suspension used hydraulic shock absorbers, while the seat had comfortable springs to compensate for the lack of rear suspension, something that was installed as early as 1937.

Production ended soon after, but the R 5 will always be an icon not only for BMW Motorrad, but also for the motorcycle world.

Anyway, for more information about this historic bike, visit the website https://www.bmwgroup-classic.com/BMW-R5.