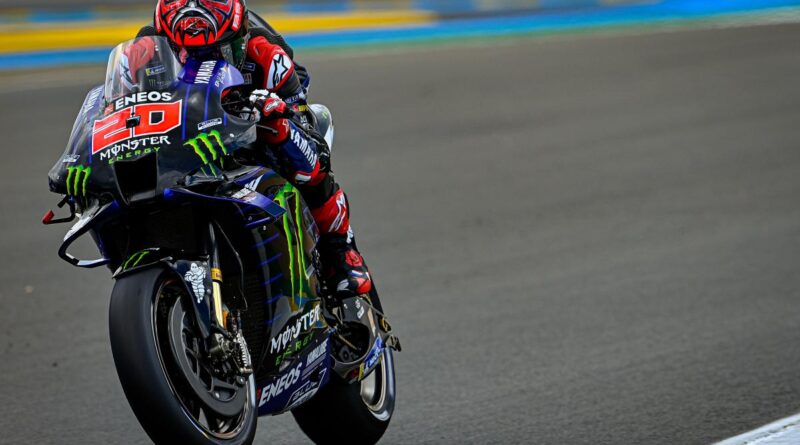 Fabio Quartararo, a Monster Energy Yamaha rider in MotoGP, will start at the front in the French GP. The Frenchman took pole position ‘at home’ in Le Mans, after returning from surgery on his arm.

With a time of 1: 32.600, he starts at the front for the third time of the year. Next to him, his teammate, Maverick Viñales, so, it’s a double for Yamaha.

Quartararo got the best time on the last lap, with an almost completely dry track, in a qualifying training that had everything.

Until the last minute of the qualifying, who was at the front and with provisional pole, was none other than Marc Marquez (Repsol Honda Team).

In fact, Honda was occupying the entire front row, with Marquez in first, Takaaki Nakagami (LCR Honda Idemitsu) in second, and Pol Espargaro in third.

But on the last timed lap, Yamaha riders gave it their all, and took the lead, with Jack Miller (Ducati Lenovo Team) closing the front row in third.

The first part of the qualifying, Q1, was also surprising, since, with the track half wet, half dry, the two drivers who made good times and moved to Q2 were Lorenzo Savadori (Aprilia Racing Team Gresini) and Luca Marini ( SKY VR46 Avintia). They left behind big names like Aleix Espargaro (Aprilia Racing Team Gresini), Joan Mir and Alex Rins (Team Suzuki Ecstar) and championship leader Francesco Bagnaia (Ducati Lenovo Team).

Opening the second row is Franco Morbidelli (Petronas Yamaha SRT), with Johann Zarco (Pramac Racing) at his side in fifth and Marc Marquez in sixth.