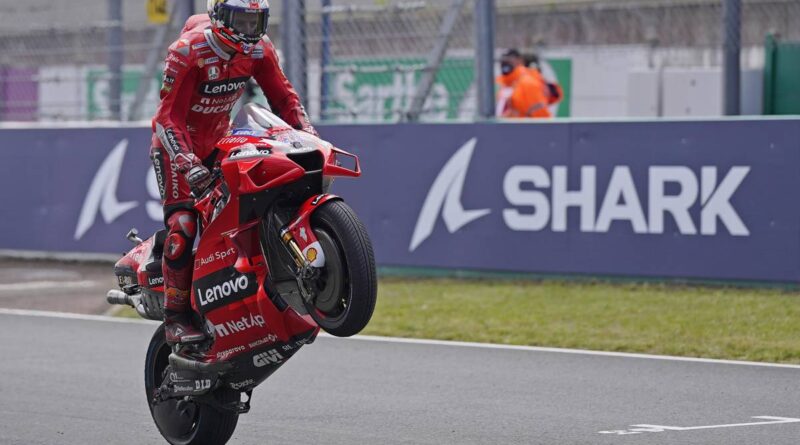 Jack Miller, Lenovo Ducati Team rider in MotoGP, won the French GP in Le Mans this Sunday. It was his second consecutive victory in the category, which puts him in the fight for the championship.

The Australian managed to overcome difficulties on the track and ended up at the top of the podium. First, he ended up in the gravel when it started to rain and, therefore, lost positions. When entering the pits to change his bike and going out with a rain tire, he exceeded the speed limit and had to pay two long penalty laps. Even with all this, the Australian drove with mastery, went over Fábio Quartararo (Monster Energy Yamaha) who, after the rain had passed, was unable to have a good performance to fight for the victory.

The race in France had it all. When it started to rain, who took the lead was none other than Marc Marquez (Repsol Honda Team). After changing the bike, the Honda rider was riding too much, opening up even more advantage for the other riders. But, for pushing too hard, he ended up falling at the entrance to the main straight. The chance of victory had been wasted. Even so, the Spaniard got back on the bike, went to the end of the grid, started to ride faster than the others, and overtook several riders. But, when he was already in tenth, again pushing too hard, he left the front and fell, abandoning the race.

Miller leaves France strengthened and with very high confidence. The next race is at Ducati’s ‘home’ at Mugello in Italy and, with that, the Australian can (of course, depending on results), take the top spot in the championship.

Despite Miller’s splendid victory, the Frenchman Fabio Quartararo (Monster Energy Yamaha), who celebrated a lot as a victory, resumed the championship leadership (by just 1 point).

He, who started from pole position, started well on a dry track, but after the rain, he had no pace for victory. He even lost the second position to Johann Zarco (Pramac Racing Ducati), another who made a spectacular race.

Who is behind Quartararo in the standings is Francesco Bagnaia (Lenovo Ducati Team), just 1 point behind the Frenchman. Bagnaia also had a sensational race, as he came out of 16th position, and finished fourth (he also received two long laps as a penalty for speeding in the pitlane).

See the race result in France:

MotoGP returns on May 30, with the Italian GP at Mugello.