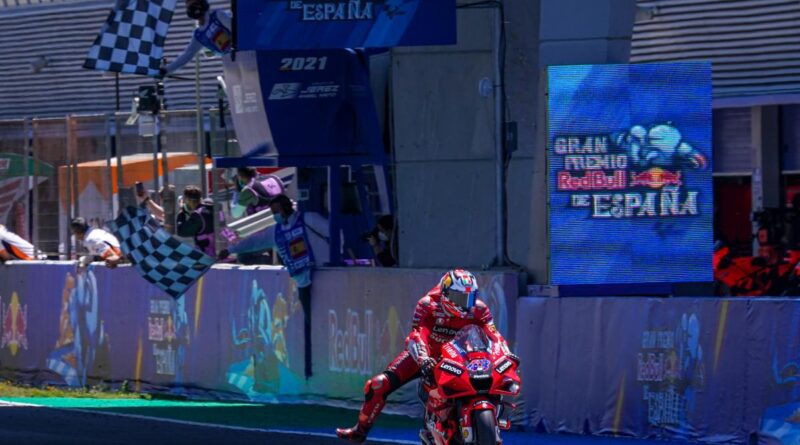 Jack Miller, Lenovo Ducati Team rider in MotoGP, shut up the critics and won the Spanish GP in Jerez this Sunday. It was his first dry track victory in the category.

The Australian took advantage that Fábio Quartararo (Monster Energy Yamaha) presented a serious problem in the second half of the race, and won on the track that, generally, Ducati does not perform well.

Even better was that Ducati made 1-2, with Francesco Bagnaia crossing the line in second. There was a lot of party and celebration in the team pits. It was the brand’s first one-two in three years.

Despite Quartararo’s problem, Miller ran an impeccable race, and made no mistake. In an interview after the race, the Australian cried, with so much emotion (in his words, “I’m a flood of emotions” and “it’s out of this world”).

Franco Morbidelli (Petronas Yamaha SRT) was also the one who had a great race. He, who rides a 2019 Yamaha YZF-M1 (2 years lag), managed to reach the podium in third.

Takaaki Nakagami (LCR Honda Idemitsu) matched his best result in the category, and crossed the line in fourth. It was the best Honda on the track.

Valentino Rossi (Petronas Yamaha SRT) has yet to find a good pace, and finished the race only in 17th.

See the race result in Spain:

MotoGP returns on May 16, with the French GP in Le Mans.