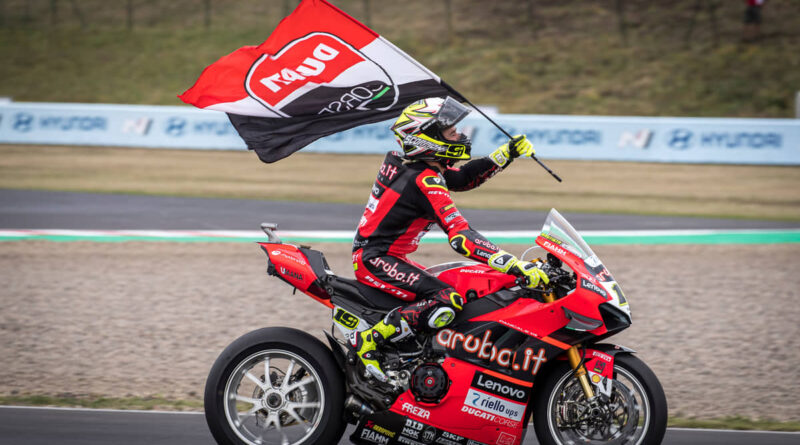 Ducati is celebrating the 1000th podium at the WorldSBK Championship, won in race 1 in Most on July 30th at the Czech Republic round.

Alvaro Bautista took victory on his Panigale V4 R motorcycle, marking the thousandth podium for the Borgo Panigale factory, a mark that has never been achieved by any other manufacturer.

At the moment, Bautista leads the championship, with 31 points ahead of the second place, the six-time champion Jonathan Rea (Kawasaki), and 38 points for the third and defending champion, Toprak Razgatlioglu (Yamaha).

Despite the good result of the Panigale V4 so far, the Ducati model that won the most in the category was 916/996/998, with 120 victories in total, most of them won by Carl Fogarty and Troy Bayliss, two motorcycle legends.

Therefore, the Borgo Panigale manufacturer wrote the history of the Superbike World Championship reserved for production machines, constantly playing the leading role with six generations of super sports bikes that claimed a total of 383 victories.

See below a little of the history of the brand in WorldSBK:

WorldSBK has seen Ducati present and victorious since the first edition in 1988, with Marco Lucchinelli on the 851 bike winning the first round ever at Donington.

Just two years later, in 1990, Raymond Roche won Ducati’s first Superbike world title with the 851. Over the next two years, Doug Polen replicated the success and the Ducati quickly became the most popular bike on the World Championship grid. winning the constructors’ title in 1991, 1992 and 1993.

The 1994 season marked the beginning of the era of Carl Fogarty and the Ducati 916 which won for two consecutive seasons. In 1996 it was Troy Corser who gave Ducati a sixth drivers’ title. In 1998 and 1999 “Foggy” – Carl Fogarty – won two more titles, bringing his total number of victories to 55 and becoming the most successful rider in history riding the Borgo Panigale Superbikes.

THE 851 AND THE BIRTH OF THE DESMOQUATTRO

The history of Ducati Superbikes parallels that of WorldSBK. The 851, born as a 748cc prototype from the minds of Massimo Bordi and Gianluigi Mengoli based on Ducati’s technical pillars – L-twin cylinder, desmodromic timing, lattice frame – was the first Ducati Superbike, equipped with the new four-valve Desmoquattro per engine cylinder.

Displacement has been increased to 888 cubic centimeters with an increased bore. The model changed its name in 1992, adapting to the new cubatura. For many enthusiasts, it was with the 851 that the Ducati of the modern era was born: technologically advanced, red and extraordinarily high-performance.

THE 916 AND THE LEGEND OF FOGARTY

In October 1993, Ducati left everyone speechless by introducing the 916, a bike capable of tracing a groove separating the “before” from the “after”. The 916 was lean, agile, powerful, with lines and solutions designed by Massimo Tamburini – also known as “Maestro” – which are still current today in their synthesis of beauty and efficiency according to the form-follow-function concept whose descendants are recognizable at Panigale. .

With a completely revised chassis and a highly evolved Desmoquattro twin, the 916 dominated every formula it raced in.

Over the years, displacement has increased. In 1998, Ducati launched the 996, the name under which a historic model such as the 996 R debuted in 2001, equipped with the first 998cc Testastretta, whose heirs can still be found today in the two-cylinder models of the Ducati range.

The Ducati 916 is the most successful of the Ducati SBKs and between 1994 and 2003, with its 916, 996 and 998 versions, it won eight world titles (including four with “King” Carl Fogarty), 122 races and took its riders podium on 311 occasions. And the 996 R is the model with which Troy Bayliss, the other great Ducati Superbike legend, began his career in red.

THE DOMINATION OF THE 999

The 999 arrived in 2003; with innovative lines, an evolved version of the Testastretta and a heavily revised chassis. The Ducati superbike ditched the swingarm on one side, introduced a superimposed headlight and the under-seat exhaust was integrated into a single silencer.

It is the Ducati Superbike with the highest win/season ratio: in just five years (the 1098 only started racing in 2008) it has achieved 63 wins and three world titles with Neil Hodgson, James Toseland and Troy Bayliss. Its riders have been on the podium 163 times.

In 2008, regulations allowed two-cylinder engines to exceed the one-liter displacement limit. Ducati introduced the 1098 as early as November 2006, continuing many of the stylistic and technical elements of the 998. The split headlight unit was horizontal again, and the swingarm on one side and the split exhaust under the seat were back.

The twin-cylinder increased in power up to 160 hp and, updated in several technical solutions derived from the MotoGP bike, especially in the thermal aspects, took the name of Testastretta Evoluzione.

Finally, the style continued elements of the Ducati tradition, modernizing them and defining a line – that of the Panigale family – recognized as a work of art and awarded the Compasso d’Oro in 2014.

The evolution of the 1299 in 2015 took the Panigale one step further, and with the 2015 model the name of the “R” version also changed, becoming the Panigale 1199 R, to indicate how the racing model’s displacement remained pegged. to the regulatory limit.

In late 2017, the most revolutionary Panigale of all time burst onto the scene. Preceded by the presentation of its Desmosedici Stradale V4 engine, the Ducati Panigale V4 was unveiled, powered by the 90° V4 with MotoGP-derived Twinpulse synchronization and counter-rotating crankshaft capable of 214 hp of power and 13 kgfm of torque for a power / torque ratio. weight of 1.1 hp/kg.

The chassis saw the introduction of the Front Frame, which continued to use the engine as a stress element. With the 2020 model came the aero package based on the winglets first introduced by Ducati to MotoGP in 2016 and the 2021 version further refined the electronics.

The 2022 model raises the performance bar again, with even more sophisticated electronic management, a more efficient chassis, ratios borrowed from the Panigale V4 R and a more efficient aerodynamic package.

The Panigale family has claimed a total of 219 podiums over their 10 years of competition, including 70 wins.