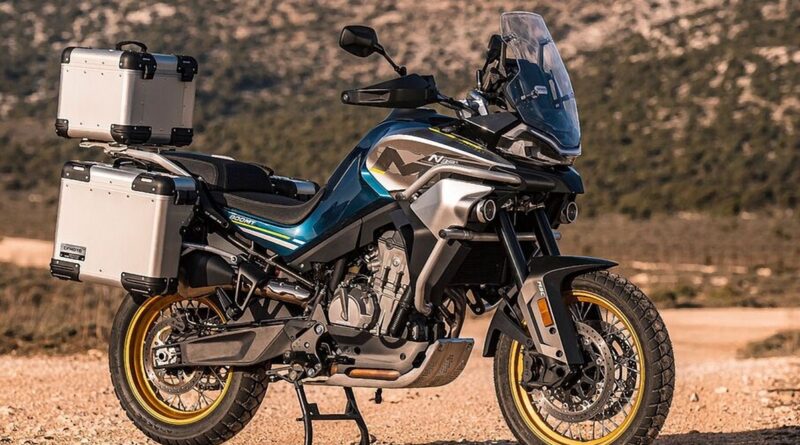 CFMoto unveiled in China the 800MT, its ‘Bigtrail’ motorcycle based on the KTM 790 Adventure. The model has its own design, which mixes elements from the Triumph Tiger 900 and even the Honda CRF1100L Africa Twin. It is considered the first big Chinese adventurous motorcycle (Bigtrail).

First of all, CFMoto is a Chinese manufacturer of motorcycles, ATV’s, UTV’s and quadricycles and has a partnership with KTM. In China, it is the one who produces the Austrian brand bikes and uses the same design studio on her own bikes. One of them is the CFMoto 250NK, which has a lot of similarity to the KTM 390 Duke.

The seat of the 800MT is very low, which will facilitate the use for people with different physical characteristics, and the fuel tank is very high, which promises great capacity.

The CFMoto 800MT is an adventurous 800 cc model, which uses the same engine as the KTM 790 Duke and 790 Adventure, a parallel 799 cm³ twin cylinder capable of generating up to 95 HP of maximum power.

In addition, the chassis also appears to be the same as the KTM model. Only the suspension and design are CFMoto’s own.

In China, the model will be offered in versions with spoked wheels and aluminum alloy. The size is traditional for adventurous models: 19″ at the front and 17″ at the rear.

For those who do not know CFMoto, the brand has the characteristic of offering well-equipped models, full of technology, for a competitive price and, with the 800MT it is no different.

Anyway, with this set, the CFMoto 800MT seems to be a more affordable alternative to the adventurous models from BMW and Triumph. But, there is no information if this model will leave China.