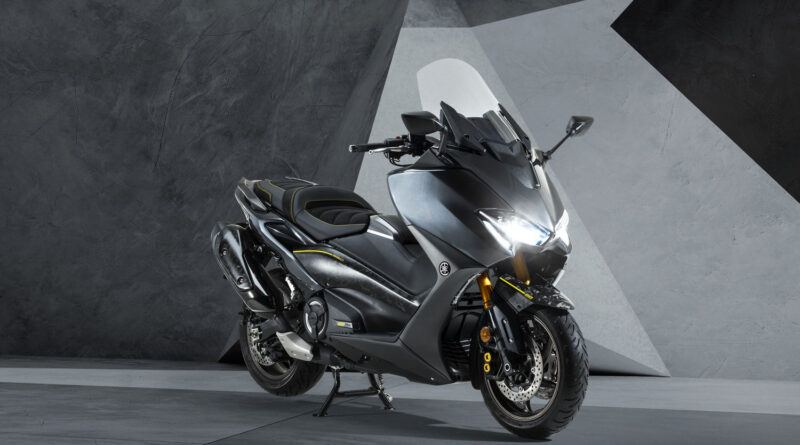 Yamaha has launched in Europe, the 2021 TMax 20th Anniversary Edition, its Sport Scooter, which comes with a range of exclusive equipment and offered in a unique new colour.

The 2021 TMAX 20th Anniversary celebrates the continuing success of the world’s most successful Sport Scooter, and gives TMAX lovers the opportunity to own the ultimate edition.

As the best-selling Sport Scooter in Europe every single year since its launch, the TMAX has been on an incredible journey, and along the way has established a truly iconic status among its legions of fans.

Two decades after the introduction of the very first TMAX, Yamaha has created a special edition model that marks the outstanding achievements of one of the most loved and revered designs in the company’s history.

As a tribute to the outstanding success of the TMAX over the past two decades, Yamaha introduce the new TMAX 20th Anniversary. Only 560 individually-numbered units will be manufactured, making it one of Yamaha’s most exclusive special editions that is sure to be appreciated by TMAX customers all over Europe.

The key feature on this new model is the forged carbon bodywork that gives every scooter its own “fingerprint”. Unlike traditional carbon fibre which has a uniform weave pattern, each of the forged carbon fibre components used on the TMAX 20th Anniversary has its own individual surface finish that makes every one of the 560 units unique.

The distinctive boomerang body panels as well as the front fender and muffler heat shield are all manufactured from this strong and lightweight carbon material, giving the TMAX 20th Anniversary an even more dynamic look and premium feel – and yellow highlights on the boomerangs and fender are a reminder of the original model’s bright yellow colour scheme.

Manufactured from premium grade materials, the exclusive heated seat features yellow stitching to match the accents on the boomerangs and front fender, and a 20th Anniversary logo confirms the scooter’s exclusive status. Heated grips are also standard, and these feature special end grips that enhance this iconic Sport Scooter’s specification.

Each TMAX 20th Anniversary will be fitted with a numbered badge that confirms its exclusivity as one of just 560 units that have been manufactured as a tribute to the industry’s most successful and iconic Sport Scooter. Together with the unique “fingerprint” of the forged carbon bodywork, the production number gives every individual model its own special identity.

The most unique and desirable TMAX ever made will be finished in a special Tech Graphite colour that underlines this very special scooter’s dynamic looks and perfectly complements the exclusive forged carbon bodywork. Contrasting bronze-coloured wheels reinforce the premium status.