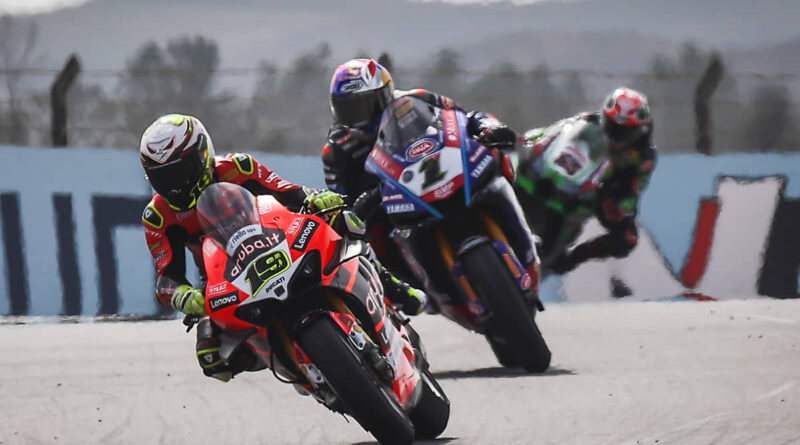 Ducati rider Alvaro Bautista won race 2 this Sunday at the Portugal round, for the WorldSBK Championship, and practically kept his lead in the championship.

Who managed to break the Spaniard’s good streak of victories was Toprak Razgatlioglu (Yamaha), who won race 1 on Saturday and the Superpole race on Sunday.

Despite the two victories, the Turk managed to reduce just 3 points in the gap to the leader, as Bautista finished in second in those two races and won race 2.

Sunday’s last race was well contested, first between Jonathan Rea (Kawasaki) and Toprak, and later, between the Turk and Bautista. Early on, Rea took the lead and applied his pace, which wasn’t that strong. Toprak decided to wait a while and save tires. Bautista also adopted the conservative strategy and did not attack.

After 5 laps, the Yamaha rider decided to take the lead, as Rea wasn’t pushing as hard. Quickly, Bautista took advantage of the occasion and also overtook the Kawasaki rider.

The Spaniard was very close to Toprak for practically the entire race, and even managed to overtake him on the main straight, but was overtaken back in the hard braking of the first corner.

At a certain point, Bautista managed to enter the last corner much closer to Toprak, overtake and open a certain advantage before braking, making it impossible for the Turk to attempt a maneuver.

But Toprak didn’t give up, he stayed very close for several laps and even carried out an overtake at another point on the track, but on the main straight he was overtaken back. With just a few laps to go, and with the tires well degraded, he preferred to consolidate his second position and stay alive to fight another day.

The biggest loser in this round was Rea, who only finished third in the three races, and saw his disadvantage to leader Bautista increase even further.

Therefore, with the result of the weekend in Portugal, Bautista is the leader with 448 points, Toprak the second with 392 and Rea the third with 366 points.

Anyway, the WorldSBK returns from the 21st to the 23rd of October, with the Argentinean round.