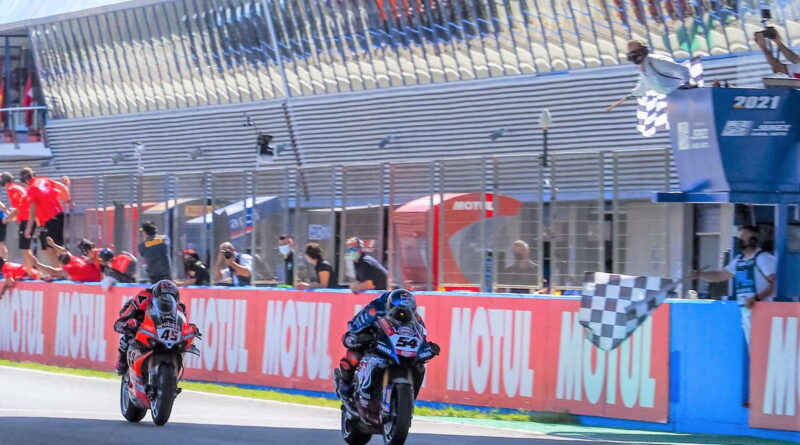 Yamaha rider Toprak Razgatlioglu won both races this Sunday in Jerez for the WorldSBK Championship and opened up a considerable lead in the championship. His main opponent, Jonathan Rea (Kawasaki), had a mediocre performance, with P2 in race 1, and P5 in race 2.

Both races took place on Sunday, as Saturday’s activities were canceled due to the death of young rider Dean Berta Viñales, in race 1 of the Supersport300 category. He, who is Maverick Viñales’ cousin, had an accident on the track and failed to survive his injuries.

Sunday’s activities started with race 1 as the Superpole race was cancelled. Rea and Toprak dueled until the end, but the Turk got the better of him, showing superiority throughout the race.

In race 2, the six-time champion failed to show a good pace, lost positions to Scott Redding (Ducati), Alvaro Bautista (Honda) and Andrea Locatelli (Yamaha), and finished only fifth. He even lost that position to Michael Ruben Rinaldi (Ducati), but managed to take it back after the Italian lose performance.

With that, Toprak opened up even more advantage for Rea, with ‘comfortable’ 20 points. Rea has in his favor the history of great results in the next track, in Portimão, where he hopes to reverse the situation.

Fight for other positions

The fight for the other positions was fierce, with Alvaro Bautista being one of the highlights, reaching the podium in race 2, in third position. The Honda rider has been showing good performance and, race after race, is getting more and more in tune with the CBR 1000RR-R Fireblade SP motorcycle. In race 1, he managed to finish fifth.

Andrea Locatelli finished fourth in both races, and consolidated his position in the championship. Loris Baz (Team GoEleven), who is replacing Chaz Davies, also stood out, coming in sixth in race 1 and ninth in race 2.

Finally, the WorldSBK Championship takes place from October 1st to 3rd, with the Portuguese round, at the Portimão Circuit.