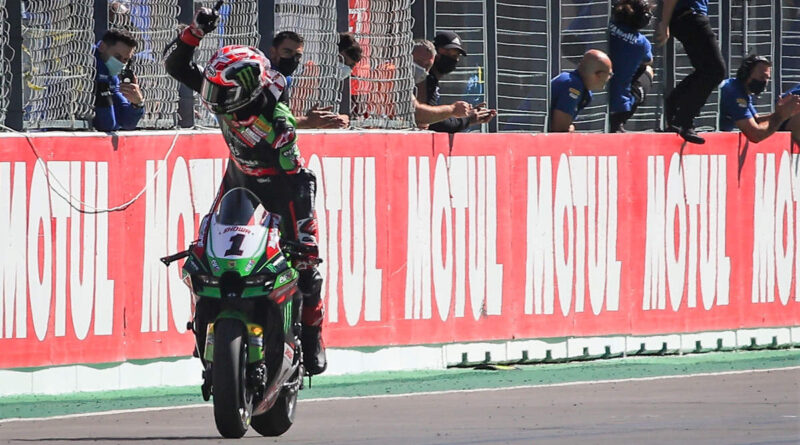 Jonathan Rea (Kawasaki) won race 2 this Sunday in Portimao, Portugal, for the WorldSBK Championship. The six-time champion finally buried his winning streak after two falls over the weekend. He crashed in race 1 and superpole, while his opponent Toprak Razgatlioglu (Yamaha) crashed in race 2.

After the weekend crashes, Rea started Race 2 at an intense pace, putting a lot of pressure on Toprak. He managed to take the lead, but the Turk resumed on the brakes on turn 1. With the fight between the two, Scott Redding (Ducati) took advantage and took the lead, but Rea showed a lot of competitiveness and managed to finally take the lead back.

With Rea’s intense pace, Toprak had to risk more and at turn 15, ended up crashing and having to retire. It wasn’t clear if it was a mechanical problem (because he broke the front fender in the crash), or if it was his mistake for pushing too hard to trying to defeat Rea.

With this, the Kawasaki rider was able to demonstrate superiority and easily won race 2. A relief for him as he did not score points in the other two races. As for Toprak, despite the fall in race 2 and sixth place in the superpole race, he leaves Portugal with more points of difference to Rea.

Fight for other positions

The fight for other positions was fierce, especially for third place on the podium. The position was disputed by Alvaro Bautista (Honda) and Loris Baz (GoEleven Ducati), with an intense exchange of positions between the two. But, on the penultimate lap, Bautista put him inside one of the corners, but he ended up leaving a little space and Baz didn’t forgive him, put it right there, ended up touching the Honda rider who crashed and abandoned.

Bautista had another dispute very similar with Baz in race 1, when he was in front until the last corner of the last lap occupying the third position, but ended up pushing the front of the bike too much, he slipped, crashed and also retired.

Another ‘surprise’ in the Portugal round was the victory of Michael Van Der Mark (BMW) in the superpole race, his first for the team and also the first for the German brand since race 2 at the Nurburgring, with Chaz Davies, in 2013.

Therefore, with the results of the Portugal round, Toprak opened up a 24 point lead over second-placed Rea. But the six-time champion ‘returns to the game’, as after the crash in race 1 and the superpole, he was 49 points behind the Turkish.

Finally, the WorldSBK Championship, takes place from 15th to 17th of October, with the Argentinean round, at the Circuito San Juan Villicum.

One thought on “WorldSBK | Jonathan Rea wins race 2 in Portimao after two crashes; Toprak crashes out”