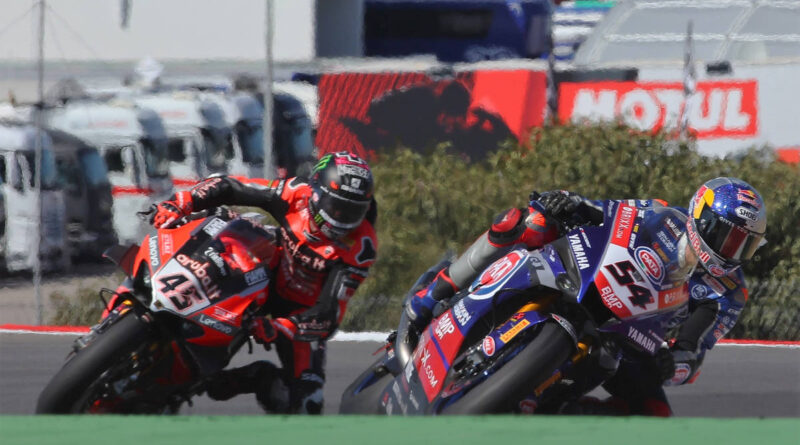 Yamaha rider Toprak Razgatlioglu won race 1 this Saturday in Portimao, Portugal, for the WorldSBK Championship. The Turkish rider had a risky race, competing turn-by-turn with Jonathan Rea (Kawasaki), who crashed out and failed to score, and with Scott Redding (Ducati).

He started from pole position, but in the early laps was fiercely attacked by Rea. The two made contact but fortunately did not crash. With the ‘fight’ between the two, Redding took advantage and took the lead. But, on lap 5, Rea managed to overtake and was extracting everything from the bike, until, in turn 15 he crashed out and had to retire.

With that, Redding led a few more laps, but always under pressure from Toprak. On lap 12, the Turkish went all out and, as he brakes later, he regained the lead in the race. But it wasn’t done. Redding didn’t let it go and the two dueled until the last lap. Whenever the Ducati rider managed to overtake him, he immediately got it back on the brakes on turn 1.

After the race, the British rider said that the Turk was ‘crossing the line’ of wisdom, putting other riders in danger with his maneuvers. With that, he had to avoid contact because, if he wanted to make his line, the two would collide and something serious could happen.

Anyway, he thought his performance was very good and that he was happy with the second place. Toprak, with the victory and the Rea’s misfortune, opened 45 points of advantage in the championship.

Making Kawasaki’s situation even worse, Rea was taken to the medical center for evaluation and on Sunday morning he will be re-evaluated to see if he will be fit for Race 2. If he doesn’t run, he could give the Yamaha rider another 25 points. In addition, his partner, Alex Lowes, did not compete in race 1 and may not compete in race 2.

Therefore, with this Saturday’s results, Toprak managed to open a 45-point lead over second-placed Rea.

Finally, race 2 and the superpole of the WorldSBK Championship, takes place this Sunday, October 3rd, in Portimao, Portugal, at the Circuito Autodromo Internacional do Algarve.