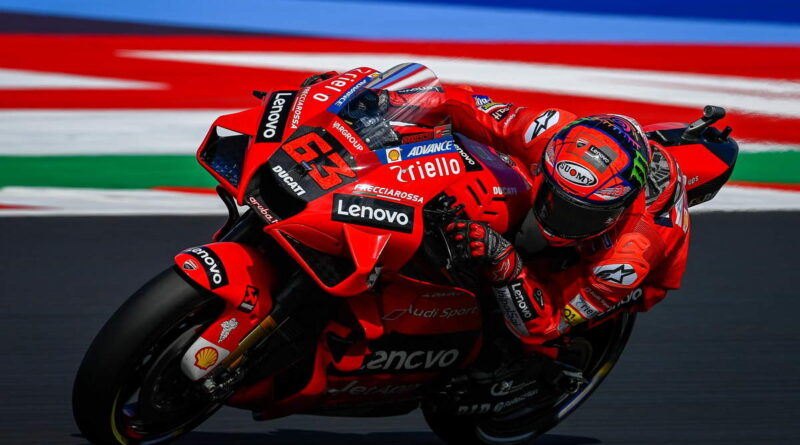 Francesco Bagnaia, Ducati Lenovo Team rider in MotoGP, won the San Marino GP this Sunday. It was his second consecutive victory in the premier class, but who ended up stealing the spotlight was another rookie, Enea Bastianini (Avintia Esponsorama), who managed to finish third.

Bagnaia started from pole position and managed to open a certain advantage to the other drivers. The Italian was riding impeccably and at one point, he had almost 3 seconds ahead of his partner, Jack Miller. It was enough advantage to get hold of Quartararo in the end.

Miller then began to lose performance and was passed by Fabio Quartararo (Monster Energy Yamaha MotoGP) and Enea Bastianini. The Avintia rider had a spectacular race, as he came out of 12th position, managed to overtake several times with his Ducati GP19 (two years old), and finished in third, marking his first podium in the premier class.

Ahead, Quartararo was starting to apply pressure on Bagnaia in the final laps, as he had more tires. He managed to get very close, but not close enough to try to overtake, and settled for second place, after all there were 20 points guaranteed in the championship. With that, Bagnaia got his second win in the category, and consecutive, increasing his confidence for the final races of the season.

On the other hand, Miller continued to lose positions on the track. He was passed on the last lap by Marc Marquez (Repsol Honda Team) and Joan Mir (Team Suzuki Ecstar), but the latter took a penalty for leaving the track, and lost one position.

Anyway, Quartararo leaves San Marino still in the lead of the championship, but with less points of advantage for the second place.

MotoGP returns on October 3rd, with the GP of the Americas, in the United States.